This work was purchased by the Government of Ontario from the 40th annual OSA Exhibition, 1912

”Ontario Society of Artists.  Catalogue of the thirty-fifth annual exhibition, open from February 23 to March 20, 1907."  Toronto, OSA, 15 p. plus illustrations.

“Among the larger pictures one of the most notable has come out of the West. Charles W. Jefferys, of York Mills, Sask. [sic], has pictured for us something of the beauty of the prairies.  He shows a vast expanse of prairie under ripening wheat.  He suggest admirably the crystal light that robs distance of its mystery and pictures the full eared wheat just as it appears in the full glare of day – which is not golden, but nearly white."

p. 60  -  “The only one to have survived [from purchase at an exhibit at Normal School] is C.W. Jefferys’  Wheat Stacks on the Prairies.  This work had, in fact, been shown five years earlier at the 35th Annual O.S.A. exhibit and it was then described by The Canadian  as a painting that ‘every Westerner simply gloats over’.”

p. 83  -  entry for CWJ, bio and desc. of Wheat Stacks “Painted during, or on the basis of sketches made in the course of Jefferys’ expedition in 1906 to the province of Manitoba, it is part of a series of prairie harvesting scenes begun in Manitoba and continued in Saskatchewan in 1911. A companion piece is the now lost Autumn on the Prairie of 1908, purchased by the Government of Ontario that year.”

p. 170  -  “MacDonald’s moody, low-keyed painting [By the River – Early Spring] can be contrasted with another OSA purchase, C.W. Jefferys’ Wheat Stacks on the Prairies.  A bright, luminous work, Jefferys’ canvas depicts the clear air and strong light of the Manitoba prairies he visited in 1906.  Although the artist executed an extensive body of similar works, he is probably better known for his historical illustrations.  Often completed in pen and ink, these drawings were used to illustrate public- and secondary-school text-books and have remained popular with scholars and publishers to this day.”

“Evidently influenced by Claude Monet, Jefferys distinguishes himself from that master in the freedom and self-declarative independence of his brushstrokes and in the rejection of Impressionist rules for the use of reflected and complementary colours.  Fascinated by prairie landscapes, he executed photographs as well as drawings and paintings of the broad expanses, unapologetically including grain elevators, silos, barns and multiple other indications of human civilization and the harvesting of Nature.  This picture is a result of his first Western trip, which carried him to central Manitoba in 1906. The subject is limited to the haystacks themselves, which stand in    monumental grandeur against the filed and sky.  The painting, a paean to the radiant golden harvest and fertility of the prairie, is one of a series of works on the Manitoba plains painted by the artist during 1907 and 1907.”

p. 108  -  “As C.W. Jefferys said years later, ‘We felt in the verse of  [G.D. Charles] Roberts, [Bliss] Carman, [Archibald] Lampman, Wilfred Campbell and Duncan Campbell Scott, interpretations of the Canada that we were trying to depict.’”

p. 126  -  “When Toronto artist C.W. Jefferys travelled to the west as a reporter in 1906, it seemed to him to be ‘a land of wide open spaces, of air, of suave flowing lines, of harmonies of color…majestic and spacious…Limitless horizons extend of endless sweeps of virgin soil.’  Jefferys’ 1907 oil painting, Wheat Stacks on the Prairies (fig. 5.17), is as problem-free, as sensual, as Arcadian, and as concerned with material progress, as any contemporary painting of a central or maritime Canadian farm. Within a few years of Jefferys’ visit to the west, this part of Canada gained its own resident artists…”

p. 163  -  “Looking back at the [Canadian Art] Club’s art, as well as his own and that of his contemporaries, Jefferys said, ‘We realized that on all our painting, admirable as much of it was, lay the blight of misty Holland, mellow England, the veiled sunlight of France, countries where most of our painters were born of had been trained.’  What the next generation of English Canadian artists, including Jefferys himself, wanted was ‘to tackle our problems without reference to the standards of other and quite different countries and to try to find an adequate way of expressing the characters of our surroundings.’”

"My first sight of the country, which was to exert such an important influence on my career, was, when after crossing the more cultivated wheat-belt of Manitoba, the wonders of the Prairie flashed upon my eyes in Saskatchewan and Alberta. Words fail to describe my impressions of that amazing land. Limitless horizons extended over endless sweeps of virgin soil." - C.W. Jefferys 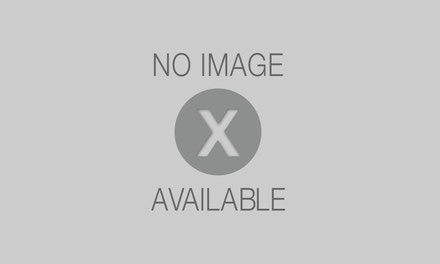 Wheat Stacks on the Prairie 1906 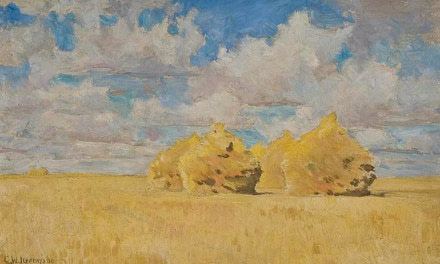 Wheat Stacks on the Prairies 1910