Expanding Horizons: Painting and Photography of American and Canadian Landscape 1860-1918 - 2009

"Expanding Horizons is a rich and varied survey of a period which forged a sense of identity that is closely tied to the landscape in both Canada and the United States. The wonders of the natural world form the subject of many of the paintings and photographs in this major exhibition, which explores the relationship between painting and photography from the time of the American Civil War to the end of the First World War in both countries.

The exhibition investigates many themes, including the emergence of ideas of nationalism, the relationship between the expanding urban environment and nature, the role of railways in expanding artistic subject matter, as well as the ways in which photography altered the practice of painting. Divided into six sections—Nature Transcendent, The Stage of History and the Theatre of Myth, Man Versus Nature, Nature Domesticated, The Urban Landscape and The Return to Nature—the exhibition examines the changing relationships to and appreciation of the natural world in both countries. The differing views of Niagara Falls, both on canvas and in photography, are but one example of this continuing evolution.

Expanding Horizons brings together for the first time works by American painters Frederic Church, Albert Bierstadt, Thomas Moran, John Singer Sargent, Childe Hassam and Georgia O’Keeffe and their Canadian counterparts Otto Jacobi, David Milne, A.Y. Jackson, Emily Carr and Lucius O’Brien, among many others. Together with photographers such as Eadweard Muybridge, Carleton Watkins, Alfred Stieglitz, Alexander Henderson, William Notman and Benjamin Baltzly, these artists helped to shape our understanding of the North American landscape and our place within it.

The exhibition is produced by the Montreal Museum of Fine Arts and curated by Hilliard T. Goldfarb. It has been supported by the Terra Foundation for American Art." 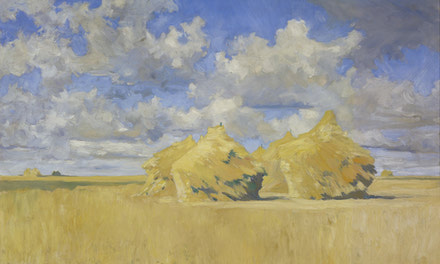 My first sight of the country, which was to exert such an important influence on my career, was, when after crossing the more cultivated wheat-belt of Manitoba, the wonders of the Prairie flashed upon my eyes in Saskatchewan and Alberta. - C.W. Jefferys