For over a week Vercheres was besieged by the Iroquois. Night and day the little garrison kept watch, inspired by Madeleine's steadfast courage. "I said that I would rather die than abandon the fort, or give it up to the enemy; and that it was of the greatest importance that they should never get possession of any French fort, because if they got one they would think they could get others, and become more bold than ever. I may say with truth that I did not eat or sleep for twice twenty-four hours. I always kept a cheerful and smiling face, and encouraged my little company with the hope of speedy succour."

On the second day, Madeleine remembered that some linen had been left to bleach by the bank of the river. Material for clothing in that pioneer time was an expensive necessity. It had been left in her charge, and she must recover it at all costs. In this, as in everything else, she felt that she must be true to her trust. The two soldiers again refused to venture out with her, so, while the cannon roared from the bastion, the gate was opened, and Madeleine and her brothers marched bravely down to the shore, gathered the linen, and carried it back in safety to the fort. Again her show of easy confidence cowed the Iroquois.

The strain of constant watching was beginning to bear heavily upon them when help arrived. At dawn on the morning of the ninth day, as Madeleine was dozing with her head on a table and a musket lying across her arms, a sentinel hastened in from the palisade to say that he heard voices on the river. "I went up at once to the bastion,' says Madeleine, "I asked, 'Who are you?' 'We are Frenchmen,' was the answer, 'It is La Monnerie, who comes to bring you help.' I caused the gate to be opened, placed a sentinel there, and went down to meet them." A force of forty men had been sent by the Governor of Montreal to their relief. "As soon as I saw Monsieur de la Monnerie. I saluted him and said, 'Sir, I surrender my arms to you.' He answered gallantly, 'Mademoiselle, they are in good hands.' 'Better than you think,' I replied. He inspected the fort and found everything in good order, and a sentinel on each bastion. 'It is time to relieve them. Monsieur,' I said, 'for we have not been off our bastions for eight days.'"

The Iroquois, discouraged by the resolute defence and the arrival of this reinforcement, gave up the siege and retreated. The resourceful courage of the young girl leader had outwitted the savage warriors.

The story of Madeleine's heroic exploit reached the ears of Madame de Ponchartrain, the wife of the Minister of the Colonies, in Paris and she procured for her a pension for life from the King. Madeleine was married in 1706 to Pierre Thomas Tarien de la Naudiere, and after his death, to Monsieur de la Perade, in 1712. She lived to the age of sixty-nine years. Her descendants rendered distinguished service throughout the French regime, and one of them continued the family tradition of devotion to king and country as an officer in the Canadian Army in France during the Great War.

To-day, on the river bank, where she marched so bravely so many years ago, stands Hebert's spirited statue, to remind us of this Canadian Joan of Arc, as M.0.Hammond happily entitles her. May we always hear, in times of peril and disaster, some echo of the youthful voice that called through the storm and darkness of the October night, the cheery hail, "All's well!" 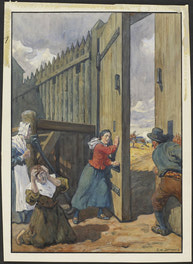 As she neared the gate, an Indian, who had outstripped his companions, caught the kerchief that covered her shoulders, but she loosed herself, and rushing in, with the aid of the manservant, she slammed and bolted the gate fast. 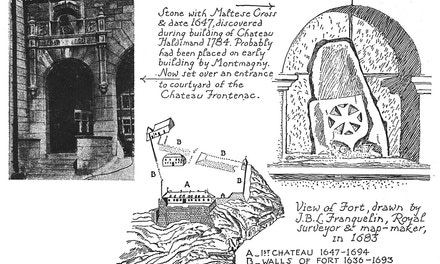