On the south shore of the St. Lawrence about twenty miles below Montreal lies the village of Vercheres. Here, in 1672, Francois Jarret, Sieur de Vercheres, received from the King the grant of a square league of land. Here he settled, made a clearing in the virgin forest, built a manor house enclosed by a log palisade with bastions, and established in the surrounding country numerous habitants to whom he in turn had granted portions of his seigneury.

Vercheres lay near to the pathway from the Iroquois country. Like every other settlement in the district it grew up under the constant menace of Indian attack. War parties lurked in the surrounding woods, and pounced upon the workers in the fields or bush clearings. The seed was sown and the crops harvested under the protection of armed men. When the alarm was given that an Iroquois raiding party was in the neighbourhood, the habitants fled from their farms and log houses to seek shelter behind the palisades of the seigneur's fort.

All through the summer of 1692 the Iroquois kept the settlers on the alert, but the harvest was gathered in safely and toward autumn the Indian raids became less frequent, and many of the habitants returned to work in their fields, where much still remained to be done.

The seigneur of Vercheres was absent on military duty at Quebec, and his wife had been called to Montreal. In the fort were left their daughter, Madeleine, aged fourteen, and her two young brothers of twelve and ten years. Besides these the only other occupants were an old man of eighty, a man servant, two soldiers, and a few women and children from the neighbouring habitant farms.

The story of how nobly the young girl met the responsibilities and dangers which suddenly fell upon her is well known, but it cannot be heard too often. Nor can it be told better than in her own simple words, as set forth in a memoir, full of graphic detail, written some years after the heroic exploit which it chronicles.

Early on the morning of October 22nd, Madeleine was at the landing place on the river bank about four hundred paces from the gate of the fort, with the hired man, Laviolette. Suddenly a musket shot rang out, followed by yells and screams from the fields where some of the habitants were at work. Laviolette cried: "Run, Mademoiselle, run! The Iroquois are here." "I turned," says Madeleine, "and saw some forty to fifty Iroquois rushing towards me. I ran for the fort, commending myself to the Blessed Virgin. The Iroquois, seeing that they could not catch me alive before I reached the gate, stopped to fire at me. The bullets whistled about my ears and made the way seem very long. As I ran, I cried: 'To arms!' hoping that somebody would come out to help me, but the two soldiers were so scared that they had hidden in the blockhouse." As she neared the gate, an Indian, who had outstripped his companions, caught the kerchief that covered her shoulders, but she loosed herself, and rushing in, with the aid of the manservant, she slammed and bolted the gate fast. The women and children in the fort were screaming with terror and bewailing the loss of their men, who had been killed in the fields. She ordered them to keep quiet, lest their cries should encourage the Indians.

"I went to examine the fort and found that several of the palisades had fallen, leaving openings through which the enemy might enter. I gave orders to have the stakes set up again, seized the end of one and urged my companions to give a hand in raising it. After the breaches had been repaired, I went to the blockhouse where the ammunition was kept, and here I found the two soldiers, one lying hidden in a corner and the other with a lighted fuse in his hand: 'What are you doing?' I demanded. He replied: 'I am going to fire the powder, and blow us all up.' 'You miserable cowards,' I cried, 'begone, I command you!' I spoke so firmly that he obeyed at once. I threw off my hood, and after putting on a soldier's hat and seizing a musket, I called to my little brothers: 'Let us fight to the death for our country and our religion. Remember the lessons our father has taught us, that gentlemen are born to shed their blood in the service of God and the king.' Encouraged by my words, my brothers and the two soldiers began to fire through the loopholes against the Iroquois. I charged a four-pounder cannon myself and ordered it to be fired, to warn the distant labourers and give the alarm to other forts."

Soon a canoe was seen approaching the landing place. It carried a settler and his family, fleeing to seek safety in the fort. Madeleine begged the soldiers to go to their assistance, but they refused for fear of the Iroquois who were still near by. She left Laviolette on guard at the gate and herself went alone to the landing. "I thought the savages would suppose it to be a trick to draw them towards the fort, so that we could rush out upon them. When the family were all landed, I made them march before me in full sight of the enemy. We put so bold a face on it, that the Indians thought they had more to fear than we. Thus I was able to save the Fontaine family."

"After sunset a violent north-east wind sprang up, with snow and hail, and I judged that the Iroquois would try to climb into the fort in the darkness and storm. I assembled all my troops, that is to say, six persons, and spoke to them: 'God has saved us to-day, but we must take care not to fall into their hands to-night. I will take charge of the fort with the old man and another who has never fired a gun, and you, Pierre Fontaine, with our two soldiers will go to the blockhouse with the women and children, because that is the strongest place. If I am taken, don't surrender, even if I am cut to pieces and burned before your eyes.' I placed my young brothers on two of the bastions, the old man on the third, and I took the fourth; and all night long, in spite of wind and snow and hail, the cries of 'All's well' were kept up between the fort and the blockhouse. One would have thought that the place was full of soldiers."

About one in the morning a noise was heard outside. Madeleine went to the bastion by the gate, and, "by the help of the snow, which covered the ground, I could see through the darkness, a number of cattle, the miserable remnant that the Iroquois had left us. The others wanted to open the gate and let them in, but I answered: 'You don't know all the tricks of the savages. They are no doubt following the cattle, covered with the skins of beasts, so as to get into the fort.' Nevertheless, I thought that we might open the gate without risk. I made my two brothers stand ready with their guns cocked, and so we let in the cattle. At last the daylight came again; and as the darkness disappeared our anxieties seemed to disappear with it." 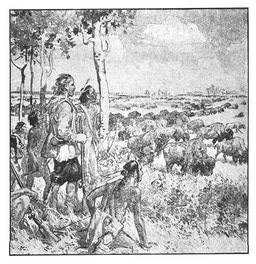 "As soon as I saw Monsieur de la Monnerie. I saluted him and said, 'Sir, I surrender my arms to you.' He answered gallantly, 'Mademoiselle, they are in good hands.'