York boats were built of selected spruce and shaped like whale boats, the bow and stern pointed at an angle of forty-five degrees. They were fitted with a rudder and a removable mast, which when not in use was sometimes slung alongside, as shown in the drawing. They were of various sizes, from twenty-eight feet to forty feet in length. The larger boats carried about one hundred "pieces," or packages of ninety pounds, in comparison with the "Canoes du Nord," which carried only twenty-five. They were equipped with duck canvas covers for protecting the goods in wet weather, and with ropes for hauling over the portages on rollers.

The crew of the larger boats consisted of ten men: a steersman, or captain, a bowsman with a long pole to fend the boat off rocks, and eight middlemen, who rowed with heavy sweeps, twenty feet long, rising to their feet on the pull of the oars, and sitting down to complete the stroke. When the wind was favourable and the water smooth, the mast was hoisted and fitted with a square sail.

York boats were used to some extent in 1795 on the Saskatchewan River, from Edmonton to Lake Winnipeg. By 1820-1826 they were in common use wherever the depth of the water admitted, on the main Hudson's Bay Company routes.

See The Honourable Company, by Douglas MacKay, and article by John Peter Turner, in The Beaver, December, 1943. 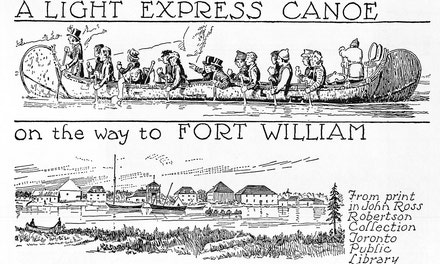 A Light Express Canoe on the Way to Fort William

The picture of the light express canoe is from an old water colour in the possession of the Museum of the Hudson's Bay Company, Winnipeg, by whose courtesy it is here reproduced. 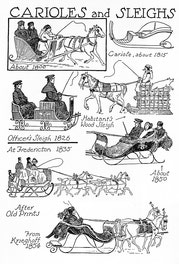