C.W. Jefferys' notes about this picture in Dramatic Episodes in Canada's Story and Canada's Past in Pictures

In each of the five sieges which Quebec has sustained the strongest defence of the city has been its natural situation. Every besieger first of all had to overcome Quebec's geography. None won a greater victory over these physical obstacles than Wolfe in 1759.

The British fleet for the capture of Quebec made its way through the dangerous channels of the St. Lawrence without accident and reached the western end of the Island of Orleans on June 26th. From here Wolfe could see the difficult nature of the task before him.

Up the river loomed the huge bulk of the rock of Quebec, and the cliffs of Levis on the opposite shore. All along the north shore below the city for six miles, from the low meadows where the St. Charles creeps in to the St. Lawrence to the heights over which the Montmorency plunges in a foaming waterfall, ran lines of entrenchments. The mouth of the St. Charles was protected by a boom of logs and by floating batteries; in front of the French entrenchments lay open fields sloping to the shoals of Beauport, which at low tide became mud flats and rocky reefs; the Montmorency was a swift-running river, with a narrow ford above the falls in the midst of thick woods which could be easily defended against superior numbers. Up the river above Quebec high rocky cliffs stretched for miles, inaccessible for the most part, and so steep and rugged that no army could make good its landing if opposed by any force. In these days of steel-clad warships, of aeroplanes, of long-range artillery, many of these natural defences could easily be overcome; but in Wolfe's time the wooden men-of-war were sailing Yessels, at the mercy of wind and tide, and their muzzle-loading cannon were of short range, small calibre, and capable of but slight elevation.

It was Montcalm's task to stay behind his defences; if he could hold out until autumn the British fleet of warships and transports would have to retreat down the river to escape being frozen in or wrecked in the wintry gales of the Gulf. Somewhere along these many miles Wolfe must find a weak spot, or else, somehow, lure Montcalm to come out and fight in the open.

The "old fox," as Wolfe called him, could not be tempted out. Wolfe bombarded Quebec from Levis until most of the town was laid in ruins; but the main fortifications and the natural defences of the position were unbroken. He attempted to cross the Montmorency; but was driven back in bush fight by the Canadians and Indians. July passed in continual artillery combats between the warships and the shore batteries, in skirmishes between rangers, Indians and Canadian militia; but the capture of Quebec or the French army was no nearer. Part of the fleet passed the batteries of Quebec safely and reached the river above the town; but Montcalm was alert to the danger that threatened him in this new quarter and sent some of his forces to defend the heights. At the end of July Wolfe made a desperate attempt to capture the French entrenchments on the Beauport shore, near the Montmorency River; but the attack failed, and the British retired with a loss of nearly five hundred killed, wounded and prisoners.

August wore away with no better success. General Wolfe's health had always been bad, and now, harassed by the memory of his defeat and disheartened by what seemed an impossible task, he fell seriously ill. From his sick bed he dictated a letter to his brigadiers, Moncton, Townshend, and Murray, begging them to meet and consult together as to the best method of attacking the enemy, and proposing three plans of his own for them to consider. After careful consideration they rejected Wolfe's plans, and proposed that the army should be taken several miles up the river beyond Quebec, where a landing might be made on the north shore, which would cut off Montcalm's supplies from Montreal and force him either to fight or surrender. Wolfe accepted their plan as a desperate chance, though he doubted its success. He had a long consultation with Admiral Saunders, who had co-operated most loyally with him throughout the campaign. If a last attempt were to be made, it would have to be within the next few days. It was now the end of August, and the fleet must leave before the end of September.

Wolfe's illness abated somewhat. He begged his doctor to patch him up sufficiently for him to be able to lead the army in person. "I know perfectly well that you cannot cure me," he said, "but make me up so that I may be without pain for a few days, and able to do my duty." To the joy of the army, by the beginning of September, he was up and about again, and once more his eager, haggard face and lanky figure were seen on board the ships and in the camps. He was dying on his feet; indomitable courage and will power alone sustained his feeble body.

More and more British vessels loaded with troops passed into the upper river, where a squadron of the fleet was now stationed. Montcalm was on the alert, for he felt certain that an attack would be made in the few days that still remained before the fleet would have to leave. He reinforced Bougainville, who commanded the force above the town. The threatened neighbourhood seemed to be the area between Cap Rouge, nine miles above Quebec, and Pointe Aux Trembles, thirteen miles further up. Along this stretch the British vessels manoeuvred for several days, drifting up and down with the tide, and apparently menacing various points, while Bougainville's three thousand men on shore followed every move. Weary work it was for them, toiling along the muddy roads, day and night, in autumn wind and rain, on the watch for the expected attack.

On a dreary, wet Sunday, the 9th of September, Wolfe wrote his last official despatch. Its concluding words reflect his almost hopeless state of mind: "I am so far recovered as to be able to do business, but my constitution is entirely shattered, without the consolation of having done any considerable service to the state, and without any prospect of it."

One chance remained. If it were possible to find a place nearer Quebec where Wolfe could throw enough men on shore and gain the crest of the precipice, he might be able to defeat Montcalm before Bougainville, lured far up the river by the fleet, could arrive to support him. The British would run the risk of being caught between the two forces; but the risk must be taken. Was there a weak spot anywhere between Cap Rouge and the city where a landing could be made?

In the journal of Captain Knox, an officer in the British army, we read, under date of September lOth, "General Wolfe sent for an officer and thirty men of the 43rd Regiment to escort him on a reconnoitre with Brigadier Townshend, the chief engineer, Col. Carleton, etc. For this purpose six of our grenadiers' coats were also sent by his Excellency's orders. ... The General, with his reconnoitring party, returned late in the evening from Goreham's Point, where they had been, with their glasses examining the cove to the eastward of Sillery, and the eminences above it." From that point, on the south shore, they looked directly across the river toward a sheltered cove, called Anse au Foulon.

Those six grenadiers' coats were worn by Wolfe and his officers, to deceive any possible observer among the French on the north shore into the belief that the party was only a group of private soldiers, or a passing patrol. Thus disguised, no glint of sunlight on gorget or sword hilt, no gleam of gold lace would reveal the presence of officers interested in this portion of the French lines. As he gazed through his field glass, Wolfe could see a winding narrow path climbing the steep cliffs to the open plains above. At the top were a few white tents that indicated the presence of a small guard. It seemed too small a guard for so important a posit1on. Here, apparently, was an opportunity. If the attention of the French could be diverted from this weak spot, this possible opening, to the menacing fleet farther up the river, a sufficient British force might be landed here, and placed in battle formation on the open ground only a short distance west of the city walls.

Wolfe began his preparations immediately. The plan as a whole he kept secret. Each subordinate officer was instructed in minute detail as to his own part; but the general scheme was known only to Wolfe himself. The exact landing place was not disclosed until the last moment, except to the Admiral and to the naval officer who had charge of the boats to carry the troops. No information must leak out to the enemy. For three anxious days the British fleet and army both kept the French in continual fear of an imminent attempt at the ends of their long line, thirteen miles above Cap Rouge, and the entrenchments, down the river near Montmorency, while there was no indication that any danger threatened the place that Wolfe had in mind.

Montcalm was not entirely deceived. Earlier in the month, as he observed the increasing British movement upstream, he had posted a battalion on the plains and strengthened the guard at the head of the path up the cliff from the Foulon. But Vaudreuil, always fussy and interfering with Montcalm's plans, sent the battalion away. Again Montcalm ordered them to encamp at the Foulon; but once more, on the 12th, Vaudreuil countermanded the order. saying, "We'll see about that to-morrow."

To-morrow was too late. That night, Knox says, "weather fair, a star-lit night") the British troops dropped into the boats from the ships off Cap Rouge and silently floated down on the ebb-tide to the landing place. By daybreak of that fatal to-morrow Wolfe and his army stood on the plains. Montcalm's line of natural defences had been pierced, and the short but momentous battle followed that brought death to both commanders and settled the fate of Quebec. 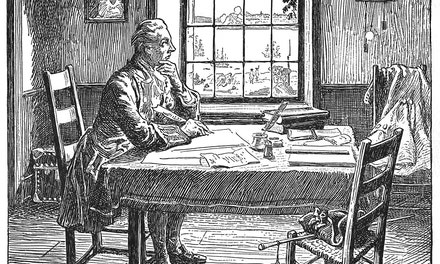 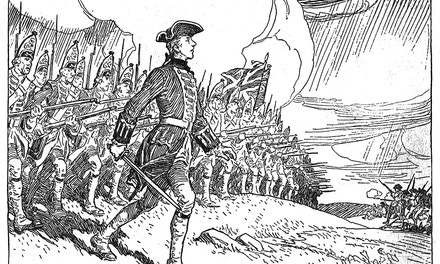 Many incidents of Wolfe's siege of Quebec reveal the immense contrast between the methods of warfare of to-day and those of two centuries ago. 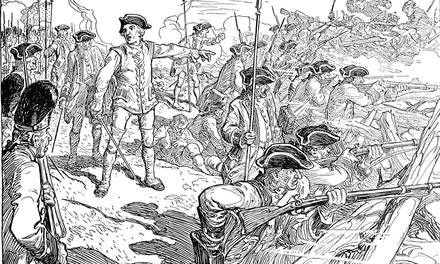