White whales, a species of aquatic mammal, still frequent the Gulf and the lower St. Lawrence River. In the earliest days of Canadian history we hear that they were hunted by the Basque and Breton fishermen for the oil which was procured by boiling down the fat which lay several inches thick beneath their hides, which were also valuable for making leather. In Une Paroisse Canadienne au X VII Siecle, by the Abbe H. R. Casgrain, a good description is given of the method of catching them and rendering the oil at Riviere-Ouelle, one of the principal places where this industry was carried on. In addition to the method of trapping them in enclosures of wooden stakes in shallow bays where the receding tide left them stranded on the mud fiats, white whales were also hunted by harpooning or shooting them from small ships. One such vessel, a sort of fishing lugger, is mentioned in 1733 as being armed with small cannon for this purpose.

From the earliest times, the cod fisheries of the Gulf of St. Lawrence and the waters around Newfoundland attracted large numbers of vessels from France, England, Spain and Portugal. Two kinds of fishing were employed. What was called "dry" fishing was done generally from boats near the shore, for the smaller fish, which were salted, then washed out, and spread out to dry on the stony beach or on wooden racks or staging. The areas favourable for this were those where there was less fog and damp weather. "Wet" or "green" fishing was carried on with ships, mainly on the "banks" distant from the coast, where the fish caught were larger. They were salted and taken direct to their market in their wet and briny condition without drying. The illustration showing the method of "dry" fishing is taken from Keith's Virginia, 1783.

Detailed accounts of the fishing industry are given in the Description of the Coasts of North America, written in the seventeenth century, by Nicolas Denys, who was engaged for many years in fishing enterprises in Acadia. A translation, with notes, by Professor W. F. Ganong, was published by the Champlain Society, Toronto. See also The Cod Fisheries, by Professor H. A. Innis, The Ryerson Press, Toronto. 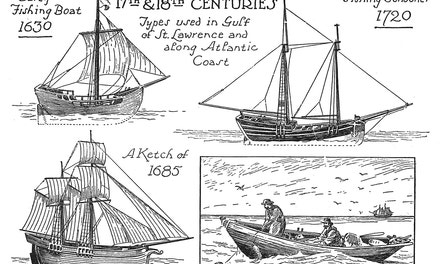 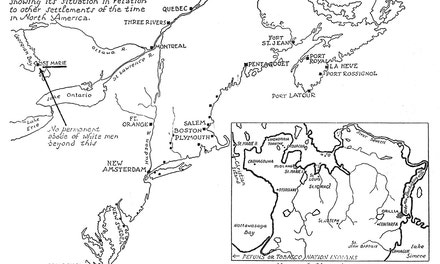