British regiments or battalions consisted normally of ten companies, two of which were composed of specially selected men: a Light Infantry company, of active, alert men, generally good marksmen, employed as skirmishers, and a Grenadier company of the largest and heaviest men, who led in bayonet charges and close fighting. When the regiment was drawn up in line, the Grenadier company was stationed on the right and the Light Infantry company on the left.

By law all able-bodied men between the ages of sixteen and sixty, with the exception of those belonging to pacifist sects, such as Quakers and Mennonists, were obliged to serve in the Canadian Militia. This force was known as the "Sedentary" Militia. From it was obtained for active service the" Embodied" Militia, composed of volunteers and those chosen by ballot. Two companies, known as flank companies, were drawn from the battalions of Embodied Militia, each consisting of one hundred picked men under the age of forty, who were drilled six days a month, and could be called out at a moment's notice, and kept on active duty as long as their service was necessary. During the War of 1812 they were often called out to meet invasion, and there is frequent mention of their being released for a time to go home to sow or reap their crops, many of them being farmers.

In addition to the Militia, battalions of Canadian Regulars, such as the Glengarry Light Infantry, the Fencibles, Voltigeurs, the Newfoundland Regiment, etc., enlisted for the duration of the war.

The American forces in the War of 1812 consisted of the Regular Army, the United States Volunteers, enlisted for shorter terms of service both under Federal authority, and the Militia of the different States of the Union, enlisted also for short terms and not obliged to serve outside of their respective States without State authority.

The John Ross Robertson Collection in the Toronto Public Library contains many coloured drawings showing uniforms of British regiments which had served in Canada. These are most useful; but the student must be warned that in some cases the uniforms depicted, while those of the regiment and correct as to facings, etc., are not such as were worn at the time they were stationed in Canada. In particular it should be noted that by 1812 pigtailed hair and knee breeches had been discarded. The hair was cut to conform to the shape of the head, long trousers, slightly split at the ankles, were substituted for breeches, and stiff shakos had taken the places of the earlier broadside cocked hats. 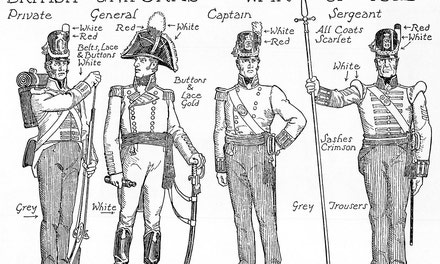