The Simcoes and Castle Frank

Francis Gwillim Simcoe, first son and sixth child of Lt.Governor Simcoe, born Wolford, Devonshire, 1791, and brought to Canada by his parents. Returning with them to England in 1796, he was educated for military life, and entered the army as lieutenant in his twenty-first year. Went with his regiment to Spain, where he was killed in April, 1812, at the storming of Badajoz. At the same siege fell also on April 6th a young Canadian officer of the Royal Engineers, Edouard Alphonse de Salaberry, younger brother of the victor of Chateauguay.

Robert Pilkington (1763-1834), lieutenant in the Royal Engineers, served on Simcoe's staff, 1793-1796. Accompanied him on his journey to Georgian Bay, and made sketches of scenery in that neighbourhood and elsewhere in Upper Canada. Returned to England in 1803, and subsequently became Major General and Inspector-General of Fortifications.

In the spring of 1794 Simcoe built a summer residence in the woods on the high ground overlooking the River Don, north of the town of York, just beyond the present St. James' Cemetery. The Governor named it Castle Frank after his son. The building was of hewn logs, with four large unbarked pine trunks supporting a pediment or projection of the roof over the front entrance. After the departure of the Simcoes it was occupied occasionally by President Peter Russell and his family; but by 1807 the building was uninhabited and beginning to fall into decay, and finally was accidentally burned in 1829. There are many references to Frank Simcoe and to excursions to Castle Frank in Mrs. Simcoe's Diary.

The view of the Harbour is from a sketch by Mrs Simcoe. 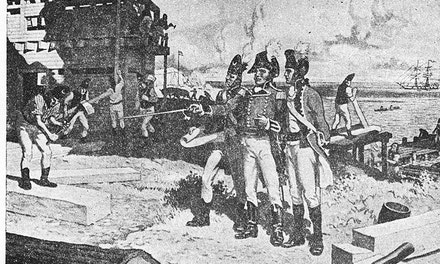 Simcoe At The Building Of Fort York, 1793