Notes on Part One

In 1535 Cartier found Iroquoians occupying the St. Lawrence region, including the villages of Stadacona (Quebec) and Hochelaga (Montreal). Seventy years later Champlain found this territory in the possession of Indians whose language was different from that recorded in a list of words made by Cartier. Evidently during this period the Iroquoians had been pushed out of the St. Lawrence valley by the more northern and eastern tribes of Algonkians. By Champlain's time the lroquoians were settled around Lake Ontario and north of Lake Erie.

The Algonkians were the most wide-spread group of Indians speaking much the same language. They extended from the Atlantic coast to the western prairies.

When the white men came into contact with the western Indians early in the eighteenth century, they found them grouped into four great language divisions:
1. The western extension of the Algonkians.
2. Athapaskans, occupying the country north of the Churchill River to the Eskimo territory and the Yukon.
3. Siouans, composed of Gros Ventres and Assiniboines, or, as they were sometimes called, Stoneys, in the country south of the Algonkian group. Later the Stoneys moved west to the foothills.
4. Pacific Coast and Mountain Indians, comprising several tribes, speaking different languages.

The general locations of the tribes are shown on the map, which is based on the excellent coloured map in The Indians of Canada, by Diamond Jenness.

Sagard's residence of several months in Huronia enabled him to give a more detailed description. He says that in entering the gate of the palisaded village "one is forced to pass turning sideways and not striding straight in." He also tells us that in choosing a site for a fortified village they take care

The beaming tool was so named because the skin to be dressed was laid over a smooth log or beam from which the bark had been stripped. The beam was placed in a sloping position, one end on the ground, and the other either braced against the abdomen of the worker, or the trunk of a small tree at the base of a low branch. The tool, gently pressed against the skin covered beam, was drawn downwards to scrape off the hair.

The clothing of the Indians varied according to the nature of the country which they inhabited. In addition to the skins of fur-bearing animals, which they used as robes, they also fashioned garments fitted to the body, illustrations of which are shown on these pages.

It should be observed that the Indians of the woods never wore long and elaborate feather head-dresses as did the plains Indians. These would be quite unsuitable in the tangled underbrush of the forests and the bushes bordering the waterways. Pictures are incorrect which show Indians in the woods wearing western war-bonnets, instead of one or two feathers, which was their practice whenever they wore any at all. Only on a few ceremonial occasions did some of the woods Indians wear a sort of crown of feathers arrayed in a circle round the head; but this was never worn when travelling or hunting. Notches were sometimes cut in the feathers and their tips dyed with red to denote the rank of their wearers or to indicate some exploit.

Moccasin patterns varied considerably, the principal difference consisting in the position of the seam joining the sole and the upper. In general the woods Indian moccasin was made large and loose, and had the sole drawn up well over the foot and puckered in front where the upper was sewn on just below the ankle. This type was adapted for travel in heavy snow, in wet weather and on swampy ground. The plains Indian moccasin generally had a stiffer, flat sole, sewn on to the upper around the foot, as in our boots and shoes. Usually these western moccasins fitted the foot more snugly, its front following its shape to a point at the big toe. Moccasins were often made from old mooseskin robes, which were greasy, and therefore resisted moisture better. Needles, awls, or bodkins were made from splinters of bone ground to a sharp point. Thin tendons and sinews of deer and other animals were used for thread.

The elm-bark canoe was not equal to the birch-bark for speed, portaging or durability. It was heavy, difficult to put together, almost impossible to render water-tight, and split easily on contact with rocks. It was generally used as a hastily-constructed emergency craft for short voyages. The country south of Lake Ontario did not contain birch trees of the size and quality found farther north. The Iroquois, therefore, were frequently compelled to use elm bark; but they procured birch bark wherever it was possible.

Lacrosse was developed from an Indian ball game in which a large and variable number of players took part. The name was given by the French on account of the stick by which the ball was caught and thrown. In its original shape this resembled a bishop's crozier, the handle being bent round to form a circle tied together with thongs of gut or rawhide to make a pocket. Later the pocket or bag was lengthened so that it became triangular in shape rather than circular. The game is not mentioned by Cartier nor Champlain. The earliest reference to it is in the Jesuit Relations of 1636. Later descriptions are to be found in the Journal of Father Charlevoix, in the Manners of the Savages by Lafitau, and with illustrations in the works of George Catlin.

The Indians decorated their clothing, utensils, weapons, etc., with designs created by themselves, and applied by means of painting, carving, incising, weaving and embroidery. Each great region of the country developed its own type of design. Some of the most distinct styles are illustrated in these pages; but for detailed information special books must be consulted and museum collections must be examined. The best introduction to the study of Canadian Indian design is An Album of Prehistoric Canadian Art, by Harlan I. Smith, issued by the Victoria Memorial Museum, Ottawa, which includes many drawings, and a list of books and articles on the subject, and of museums containing specimens.

Much of the Indian decoration of today has been influenced y European designs, materials and tools; but even when this is the case, native originality is often seen in their application. Thus, in particular, the tall totem poles placed outside the houses date from the coming of the whites, who brought steel tools which made it possible to produce such elaborate objects. Further information concerning them will be given in Vol. 2 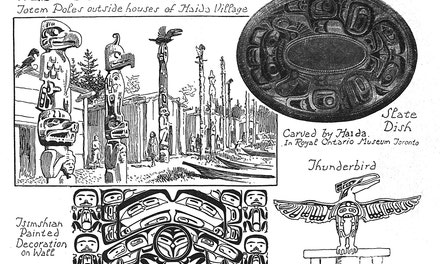 The Indians decorated their clothing, utensils, weapons, etc., with designs created by themselves, and applied by means of painting, carving, incising, weaving and embroidery. 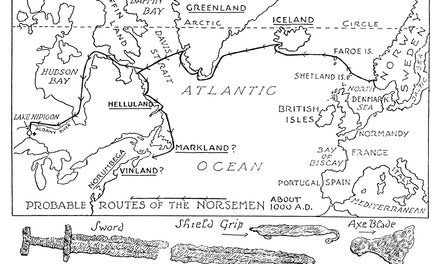