I have included only those sources which I have found most useful for the pictorial reconstruction of Canadian history. The accompanying list covers but a small portion of the material available.

Valuable details often are mentioned incidentally, and can be found only by reading through many pages of matter irrelevant to our purpose in the hope of coming across the specific piece of information required. There is no short-cut: no quick and easy method of acquiring the knowledge of those minor facts which give life and authenticity to a historical reconstruction. This collection is intended to provide an outline of the territory to be explored and a guide to the searcher in making his own discoveries.

In addition to the library and museum material, one must know the geography and climate of the various parts of the country. The best way to learn this is by visiting and observing the actual localities in which historical events occurred. Parkman realized this to the full: from the beginning he studied the history of North America as much in the open air as in the archives. It is this personal acquaintance with the natural world wherein his personages lived that makes his story so intensely real, alive and picturesque. Though the appearance of the country has changed greatly during the centuries since its settlement, certain features are permanent. East is still east, mountain, plain and sea-coast show but little alteration, the round of the seasons is perennial. The weather, the time of day, the topography are essential elements of the pictorial story, they set its background, and determine its atmosphere and colour.

I. GENERAL WORKS DEALING WITH THE PERIOD

Canadian History, a Syllabus and Guide to Reading: R. G. Trotter. Valuable outline of topics, and lists of books.

Catalogue of Pictures in the Public Archives of Canada: J. F. Kenney. Contains excellent prefatory essay on pictorial historical material, with clear and comprehensive description of methods employed in making engravings and other forms of pictorial reproduction. Notes on the individual pictures give complete details as to authorship, size, dates and technical information. Catalogue covers period until 1700, only a fraction of the large amount of pictorial material available in the Archives.

Cartier to Frontenac: Justin Winsor. Both these works contain many early maps and illustrations.

Canada and its Provinces.

The Rise and Fall of New France: G. M. Wrong.

The Voyages of Jacques Cartier: Translated and edited by H.P.Biggar. (Public Archives of Canada)

Documents Relating to the Early History of Hudson Bay: Edited by J. B. Tyrrell. (Champlain Society). All the publications of the Champlain Society give both the original French text and a good translation, together with introductions and complete notes.

A New Discovery of a Vast Country in America: Father Louis Hennepin. Translated with introduction and notes, by R. G. Thwaites.

The Jesuit Relations and Allied Documents: Edited by R. G. Thwaites. A complete index makes reference easy to the 72 volumes of original texts and translations.

Historical Journal of the Campaigns in North America-Knox: Translated and edited by A. G. Doughty. (Champlain Society)

The Kelsey Papers: Edited by A. G. Doughty and Chester Martin.(Public Archives of Canada)

The Indians of Canada: Diamond Jenness. (National Museum of Canada, Ottawa). The best general survey of the subject; profusely illustrated.

The St. Lawrence, Its Basin and Its Borderlands: S. E. Dawson.

The Search for the Western Sea: L. J. Burpee.

Old Churches of the Province of Quebec: P. G. Roy.

The Island of Orleans: P. G. Roy. These volumes are sumptuously illustrated with many reproductions of photographs, paintings, drawings and old prints.

Glimpses of the Monastery: Scenes from the History of the Ursulines of Quebec. By a member of the community.

Louisbourg, from Its Foundation to Its Fall: J. S. McLennan.

The Conquest of New France: G. M. Wrong. (The Chronicles of America). An excellent one volume history of the french and English conflict for the continent.

The Siege of Quebec: A. G. Doughty and G. W. Parmelee. The six volumes of this work give the fullest details on the subject, and are profusely illustrated.

Seigneurial Questions: Lower Canada Reports, Opinions of Sir Louis H. Lafontaine, Bart., C.J., 1856. This report contains much information on the laws and customs of the feudal system of French Canada, such as mining, fishing and timber regulations, dues and rents, mills, etc.

The Romance of Medicine in Canada: J. J. Heagerty.

Documents Relating to the Seigniorial Tenure in Canada: Edited by W. B. Munro. (Champlain Society)

The Seven Years' War: Sigmund Samuel. Contains reproductions of many important prints illustrating the later years of the French regime.

Handbook of Indians of Canada: Supplement to Annual Report of Department of Marine and Fisheries, Ottawa.

Much information is to be found in articles contributed to historical periodicals and in papers and records published by learned societies. The index of most of these will guide the reader in search of specific information, but often the detail required is too minute or incidental to be listed. For the period covered by this book the following list will be useful:

The Royal Society of Canada, Literary and Historical sections - Proceedings and Transactions.

Canadian Historical Review, and its predecessor, Review of Historical Publications Relating to Canada.

Some of these have published catalogues of their collections, others from time to time issue monographs or hand-books on special subjects: but personal examination and study of the objects themselves is indispensable, and photographs or, better still, drawings of them should be procured. The museums listed contain material relating to the French regime and to the Indians of Canada.

Extensive collections of Indian and Eskimo material, excellently displayed, and scientifically grouped. Drawings and paintings of Indian life by Catlin, Kane, Morris and Heming. Sigmund Samuel Collection of early Canadian prints and drawings. The Museum contains many specimens of weapons, furniture, etc., of the 17th and 18th centuries, indispensable to students of Canadian history. These have been gathered under the direction of Dr. C. T. Currelly, and correctly titled, dated and described by him to illustrate their development.

JOHN ROSS ROBERTSON COLLECTION, PUBLIC LIBRARY, TORONTO.
Though mainly consisting of items relating to early Toronto, includes also many prints, drawings and paintings of persons and places connected with the history of Canada from coast to coast.

THE MANOIR RICHELIEU, MURRAY BAY, QUEBEC.
This hotel contains the remarkable W. H. Coverdale Collection of Canadiana, consisting of paintings, drawings and prints. Particularly rich in early views of the St. Lawrence and Ottawa, Niagara and the Great Lakes, but also including a wide range of Canadian pictorial material of historic interest.

Museums have been established at The Canadian National Parks at Fort Chambly, Quebec, Fort Beausejour, N.B., Annapolis Royal and Louisbourg, N.S., which contain many useful and interesting local relics. The Parks Bureau has published a series of small handbooks, containing short accounts of the history of these and other places under its administration. 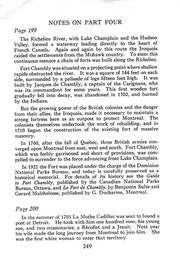 The Picture Gallery of Canadian History Vol. I (Notes on Part Four)