FOR the period covered by this volume there are so many sources of information that it is difficult to make a selection limited to the space available.

Pictorial records especially are numerous. From the time of the siege of Quebec a succession of officers of the British army and navy stationed in Canada have left us drawings of the scenery, the settlements and the life of the new colony. Many of these were engraved and published as prints in England. Civilian authors and artists also visited the country and wrote and illustrated books which give much information concerning the period. Portrait painters from the old land and the United States toured the country or established themselves in the towns and depicted the likenesses of the men and women of the time.

Besides these pictorial documents, numerous buildings, public and domestic, still survive, though many of the earliest structures, being of wood, have disappeared through decay or from fire. Much furniture and a considerable number of other physical objects, dating from this period, such as costumes, weapons, vehicles, tools and vessels, are to be found in museums and in private houses.

In this period, too, the territory to be covered grows more extensive. The country was explored from coast to coast and to the Arctic, and the fur-trader, the missionary and the settler penetrated into hitherto unknown regions.

Over so wide a field it is manifestly impossible in a small volume to furnish anything like a complete reference book and the searcher must look for more detailed or specific information among the sources herein listed. I must reiterate that my purpose is merely to supply a guide to further research, and to indicate by a limited number of typical drawings the resources available. In particular with regard to portraits I have not attempted to give an adequate or well-rounded collection. Many omissions doubtless will be observed: some of these portraits are familiar and easily obtainable in other books on Canadian history. Some of those which I have included have been chosen not only because they illustrate personages in themselves more or less important, but also because they show details of costume, of official robes and military uniforms, styles of hairdressing, etc., as well as the physiognomical types of the period. For it is to be observed that the human face and its expression is affected by many factors; some intangible, such as occupation, the ideas and ideals of the time, social position; others more material, as food habits and certain fashion details. A comparison of these various human countenances will lead to a perception of the prevailing characteristic expression of the time. There are no grinning faces and no display of teeth, such as mark our present era of "look pleasant" photography. On the whole, our pioneer forefathers and mothers appear a rather grim lot, though on occasion the younger ladies may look sentimental or simpering, and the gentlemen arrogant or benevolently condescending.

It will be observed that many of the portraits are from drawings by myself. The originals from which these are taken are, in most cases, oil paintings, more or less darkened by time, or from somewhat dingy reproductions. Photographs of these originals do not generally make clear or satisfactory "half-tone" engravings. I have therefore translated them into pen or crayon drawings, but in so doing I have tried to make faithful copies of the original work, emphasizing the character and concentrating the interest on the features and on accessories such as hairdressing and costume, with as much clearness of detail as possible.

Similar considerations as have directed my selection of portraits have been followed in the choice of buildings, etc., included in this volume. Consequently I have omitted the pictures of some familiar houses easily accessible in other works, some which have been so remodelled or obscured by later additions that they show little of their earlier appearance, and others, interesting in themselves, which are not typical of the design or the methods of construction of the period. In addition to some buildings connected with important historical events and personages, I have tried to present specimens characteristic of various localities, and illustrative of the changing styles through the years of the country's development. Neither in the portraits nor the buildings, nor in other items, have I confined my selections rigidly to the date limits set forth in this volume: on occasion I have included later examples in order to show stages of development or to emphasize contrast; but in every such case I have tried to make this distinction clear.

The years covered by this volume were marked by two world events which profoundly affected social life in Canada as elsewhere: the Independence of the United States and the French Revolution. Two great migrations resulted from these upheavals: the coming of the Loyalists, and the influx of settlers in the eighteen twenties and thirties. Though they differed essentially in character, each set its mark indelibly on the development of Canada.

Many of the Loyalists were Americans by birth or by a residence of some years on this continent. Those who went to the Maritime Provinces came for the most part from the sea-board districts of New England and the Middle and Southern colonies. They consisted largely of town dwellers and of inhabitants of long-settled rural areas, and consequently were Americans of some generations. The Upper Canada Loyalists came mainly from the interior sections of the middle colonies, New York, Pennsylvania, New Jersey, etc. Such settlers, therefore, were more familiar with frontier conditions and pioneer life.

These differences in the character of the two groups of Loyalists were reflected in their costumes. The Maritime refugees probably brought a larger proportion of cityfied and formal clothes. Thus we see by the portraits of early Nova Scotia judges that they wore full-bottomed wigs and ermine trimmed robes, while those of Upper Canada, such as Osgoode and Powell, depict them without these decorative accessions, and it is authoritatively stated that neither judges nor lawyers ever wore wigs in this province. We also learn from the letters of Mrs. Martin Hunter that the women of New Brunswick at an early date were uniformly given to finery. Other contemporary references seem to confirm this characteristic of the Maritime settlers. One gets no such impression of devotion to fashion among the Upper Canada settlers from Mrs. Simcoe's Diary, though at such functions as balls and assemblies at Newark and York ladies and gentlemen doubtless donned such fine raiment as they possessed, a little behind the mode though it may have been. In this connection may be noted the sensation which it is said the jewels of the French Royalist emigre, the Countess de Chalus, produced in York society. John Lambert remarks upon the slovenly, negligent and old-fashioned dress of the English inhabitants of Lower Canada. Scattered references in other sources mention buckskin, homespun, and linsey-woolsey garments in use by both men and women among the Bay of Quinte Loyalists, kilts by the Highlanders, and remnants of military uniforms still being worn by soldiers of the Loyalist regiments long after their disbandment along the St. Lawrence and on the Niagara.

In contrast to these continental American settlers were the emigrants from England, Scotland and Ireland who flocked into the continent in the years of economic distress and political unrest which followed the cessation of the Napoleonic wars. Most of these new-comers were artisans, farm laborers, small tradesmen, discharged soldiers of the regular army, all of them entirely unacquainted with the conditions of life in the backwoods of America. Characteristic of this period and the following decade or more was the settlement of groups from special localities of the homeland by colonization promoters such as Colonel Talbot, Hon. Peter Robinson and the Canada Company, and by the Lanark, Rice Lake and other communities. Almost every district also contained some half-pay officers and gentry, and though all had to set themselves more or less to physical labor and generally do for themselves, the social distinctions of the old land persisted to a large extent and for many years. The former social status of the settler and his place of origin were shown by his clothing, his house and its furnishings, by his manners and customs. On his arrival, he (and she), wore such clothes as they were accustomed to in the old land, and these served them for some time in their new home. We find references to smock-frocks, to boots hob-nailed and ankle-high, to long corduroy trousers, gartered at the knee, and to women's shawls worn over head and shoulders, to pattens and clogs, home-made plaited straw hats and bonnets, to little girls' pinafores and pantalettes. Those who had been brought up in better circumstances brought with them some remnants of their former possessions, a few heirlooms, clothes of a finer cut and richer fabric, a party dress, some treasured chinaware, a few books, perhaps a family picture or two, and strove to give some adornment to the pioneer home.

Any pictorial reconstruction of this period of our past must take into account the contrasting character of these two migrations. The Loyalist settler and the post-Napoleon-war emigrant were markedly different, not only in their antecedents and their attitude of mind, but in their appearance. Attention must also be given to the social diversity pointed out by the foregoing references. A study of the numerous contemporary memoirs, letters and reminiscences is indispensable for an understanding of the conditions of the period. The most important of these are listed in the extensive bibliography included in this volume.

The illustrations, whether drawings of factual details or imaginative pictorial visualizations, are based on data gathered from these and similar sources of information, on objects in museums and private houses, and on authentic contemporary pictures.

In the third volume which will bring the pictorial story to the end of the nineteenth century, I shall not attempt to cover its enormous field, nor confine myself strictly to the period. I shall touch only upon some of its characteristic features and development, leaving many of its later topics to be sought in numerous easily accessible sources. In this concluding volume, also, I shall hope to find room for some subjects which, owing to lack of time and space, were omitted in the preceding books.

It is impossible to mention all who have helped me with information and advice over many years. I can make here only a general but most grateful acknowledgment of their encouragement and assistance. 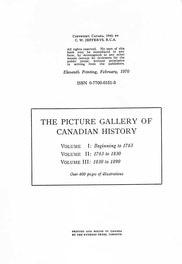 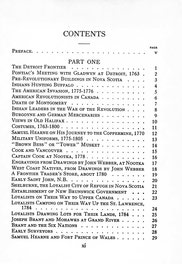