The 104th Regiment was formed in 1810 out of the New Brunswick Fencibles, raised in 1803, and was incorporated in the British regular Army. It was recruited mainly in New Brunswick, and partly in Nova Scotia, and included also a number of Canadians from Quebec; and was composed of hardy woodsmen and hunters, accustomed to the use of the snowshoe, the canoe, the axe and the musket.

The march of the regiment from Fredericton, N.B., to Kingston, U.C., in 1813, was one of the most famous in the history of the British Army. On Feb. 16th the Grenadier Company started from Fredericton, followed on each succeeding day by a Battalion Company, the rearguard, the Light Infantry Company, leaving on the 21st. The six companies, 550 rank and file, reached Quebec on March 19th, with the loss of only one man. Thence it proceeded to Kingston, where it arrived in the middle of April, and by the summer of 1813 was in action on the Niagara frontier, and took part next year in the battles of Chippewa and Lundy's Lane.

The first few days of the march were through settled country and over beaten roads. Thereafter their way led through the forest. Each man and officer took turn in breaking the trail. Every fifteen minutes the leading man stepped aside, until the whole company had passed him, when he threw off his snowshoes and marched in the rear on the hard beaten path. Knapsacks, arms, bedding and provisions were carried on toboggans, the line of the company in single file being nearly half a mile long. At night they camped in rough huts of evergreen branches covered with brush. The weather was unusually cold, and the snow the deepest in ten years.

At the south end of Lake Temisconata, two companies became stormbound and food ran short. Captain Charles Rainsford and two French-Canadian privates made a forced march to Riviere-du-Loup for relief, returning with provisions after a journey of ninety miles in two days and two nights.

Sir Martin Hunter (1757-1846), who raised the regiment and was its first colonel, was born in Durham County, England. He entered the army, and served in the Revolutionary War till 1778, fighting as ensign in the battle of Bunker's Hill. Later he saw service in India, the Mediterranean and the West Indies. In 1803 he was appointed Brigadier-General in North America, and commanded the troops in the Maritime Provinces. For a time he acted as Lieutenant-Governor of New Brunswick. He was recalled to England in 1812, and knighted in 1832.

I am indebted to Mr. G. H. Markham, of Saint John, N.B., for information on the 104th, gathered from letters of Captains Le Couteux and Playfair, and on Sir Martin and Lady Hunter, and also for their portraits, from their Journal and Letters privately printed. 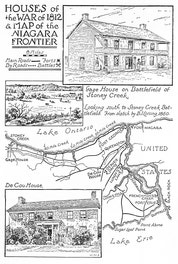 The Gage house, on the battlefield of Stoney Creek, is still standing, though its western portion, used as a store, was torn down about 1896. 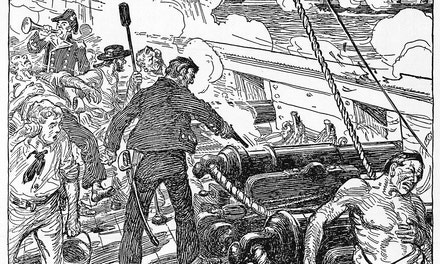 It is said that in the battle of Lake Erie, owing to insufficient and defective fuses, the cannon of Barclay s fleet had to be fired by discharging pistols into their touch-holes.