In 1797 Count Joseph de Puisaye, a refugee from the French Revolution, laid a plan before the British Government for the settlement of a number of French Royalist émigrés on lands to be granted to them in Canada. The Government agreed to the proposal, and in the summer of 1798 a party under the leadership of Puisaye set sail from Portsmouth. They arrived at Quebec early in October, and thence were transported, partly by land and partly in batteaux, to Kingston. Here they spent the winter, while Puisaye proceeded to York, to consult with President Peter Russell, who had been notified earlier by the British Government of the project. Russell and the Executive Council selected a location for the colony on Yonge Street, in the townships of Markham, Vaughan, Whitchurch and King. The situation was chosen as " being equally distant from the French of Detroit and Lower Canada, and near enough to the seat of Government both to give assistance to them and to keep an eye on them " — a consideration which indicates the suspicion with which all true Britons then regarded Frenchmen.

Early next spring the émigrés arrived, and began the difficult task of trying to make homes for themselves in the forest. It was a task for which they were ill-fitted, most of them being noblemen and former officers of the Royal Army, unaccustomed to the hard physical labour of pioneer life. The colony, after a few years of feeble existence, was abandoned, most of the émigrés returning to Europe.

One of them, however, Quetton St. George, became a successful trader, and remained in Canada until the downfall of Napoleon, when he too returned to France. At the time of his departure he was probably the most prosperous merchant in Upper Canada, with establishments extending from Detroit to the neighbourhood of Orillia, and the owner of considerable landed property. His son, born in France after his father's return, later came to Canada and settled on his property near Wilcox Lake, where he built a handsome house, and laid out extensive grounds. The house was destroyed by fire after his death, but a noble avenue of pine trees and several of the hedges he planted still remain. He is buried in the graveyard of the church at Oak Ridges.

Puisaye, after seeing his followers established on Yonge Street, acquired land on the Niagara River, where part of his house is still standing. Here he lived, in some state, until 1801, when he returned to England, where he remained for the rest of his life. Much of his correspondence while in Canada is preserved in the papers of Hon. Richard Cartwright, who was his business agent, in the Library of Queen's University, Kingston. 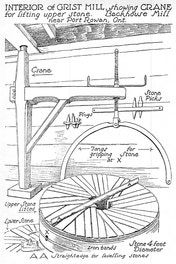 The beautifully carpentered crane resembles an engraving in Oliver Evans's Young Mill-wright's Guide, but is more elegant in design. 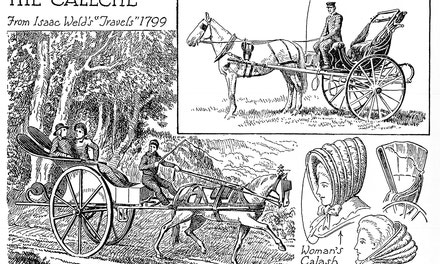 The Caléche was a two-wheeled vehicle in use in Lower Canada, similar to the one-hoss shay, or chaise of New England with the addition of a seat in front for the driver.