Shelburne, previously known as Port Roseway, the most extensive settlement of the Loyalists in Nova Scotia, was established on a fine harbour on the south-west coast of the province. Governor Parr at the request of a number of New England refugees granted them a large tract of land, sent surveyors to lay out the lots and the streets of the projected town, and provided the settlers with lumber for their houses, and provisions for their first year. With unintentional irony he named the new city of refuge after the British minister whose administration had accepted the terms of the Treaty of Versailles, which had left the Loyalists at the mercy of the victorious Revolutionists, and which was largely responsible for their present plight. In May, 1783, about 4,000 settlers arrived, and within a couple of years the new town contained about 10,000 inhabitants. Shipyards, wharves, churches, shops, taverns and sawmills were quickly erected, fish and lumber were exported to the West Indies and Great Britain, a South American whaling industry was established, newspapers were published. Shelburne became the centre of a fashionable society, and it was predicted that it would supersede Halifax as the capital. But its period of prosperity was short: the neighbourhood was not capable of supporting the numbers who had so suddenly flocked into it, and many of the settlers were ill-suited to pioneer life. Within a few years most of its inhabitants had given up the unsuccessful struggle and departed, many of the houses were taken down and removed to Saint John and Halifax, others were burned or fell into decay. Instead of a busy metropolis, Shelburne today is a quiet, secluded and picturesque town, where a few fine old houses remain to mark its brief splendour and its shattered hopes.

In the early days of settlement, numerous regulations were established in Canada to protect the villages and towns against the danger of fire that constantly threatened and often destroyed the wooden houses. Thus in 1777 the law directed that chimneys were to be swept frequently to prevent the accumulation of soot, and ladders were to be attached to the roof so that the chimney could be reached if it caught fire; each house had to be provided with two poles ten feet long, with hooks, or with cross-bars at six-inch intervals, to be used for knocking off the roofs when in anger or on fire, with hatchets, and with two buckets, of leather, or wood iron hooped, which were to be kept constantly filled with water and placed inside conveniently near the door. Town houses situated close together had to be built with their gable ends of stone raised three feet above the roof to act as a barrier to the spread of fire. The fire engine at Shelburne was one of the earliest types of the hand-pumping machine which later of larger size and operated by more men remained in use until well into the nineteenth century when the steam-pumping engine displaced it. 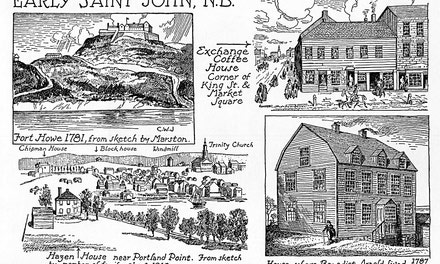