The Catholic clergy in Canada, during the French regime and until about 1860-1875, wore a sort of tab beneath the chin, called a "Rabat." This was a piece of black cloth or silk, divided into two oblong parts, edged with white. Such had been the custom in France and Belgium, from whence came the early priests serving in Canada, and naturally the same practice was followed in this country. In time it came to be associated particularly with those who supported the principles of the national church of France, which claimed certain rights independent of the jurisdiction of the Pope. These were known as Gallicans, while in opposition to them were the Ultramontanes, those who believed that all ecclesiastical power was concentrated in the Roman Pontiff. About the middle of the nineteenth century, a movement in favour of Ultramontane principles had made considerable progress, which led toward greater conformity to Roman customs, even in such minor matters as dress. Bishop Bourget, of Montreal, after a visit to Europe, issued a letter to his clergy in 1861, urging them to discard the" Rabat" and adopt the" Roman Collar." Other bishops followed his action, and the change became general, though some, especially in the diocese of Quebec, regarded as the stronghold of Gallicanism, continued to wear the Rabat until 1875, when Mgr. E. A. Taschereau ordered the substitution of the Roman Collar.

Indians Breaking Into A Beaver House

Before the introduction of steel traps, the Indians caught the beaver by piercing a hole in the roof of the house with an icechisel, set into a heavy six-foot pole, after barring the underwater outlet with stakes driven through the ice. 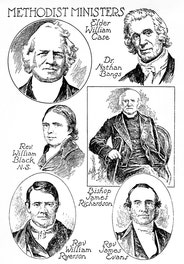 William Black, 1760-1834, the father of Methodism in Nova Scotia, was born in Yorkshire, and came to Nova Scotia with his parents in 1775. He became a preacher...