Lieutenant-Colonel James Cockburn was stationed in Canada for several years, during which he made a great number of water colour drawings. Some of these were reproduced and published as colour prints, but they are only a small portion of the many sketches he produced in Canada. The Manoir Richelieu Collection at Murray Bay contains a number of original drawings, in addition to sets of his prints. The Sigmund Samuel Collection possesses over a hundred originals, which depict scenes from the St. Lawrence to the Niagara.

His drawings give most valuable details of early buildings and show the general appearance of the country at the period. Especially interesting are the human figures which he introduces into his scenes: they are always in character with the localities depicted, and are faithful transcripts of the costumes and uniforms, whether soldiers, sailors, ladies and gentlemen, habitants, voyageurs or pioneer settlers.

The sketch of the English Cathedral is possibly the earliest drawing of this building that exists.

The drawing of the funeral procession gives a view looking up the present Ste. Famille Street from near Hope Gate, which at that time gave its name to the street. Besides being an excellent sketch of the buildings, several of which still survive, it is especially valuable for the details of the funeral cortege, which is evidently drawn from observation. The funeral is that of a young person, as is indicated by the small size of the coffin and the white bands around the hats of the bearers, a detail which shows that this custom is of greater antiquity than is popularly supposed.

M. P. G. Roy, archivist-emeritus of the Province of Quebec, always most generous in his assistance to historical inquirers, has kindly supplied information regarding old French-Canadian funeral customs. I translate freely his remarks. "I have examined with keen interest Cockburn's drawing .... In the olden time, when a person died not too far from the church, the clergy proceeded to the house of mourning to make what was called 'la levee du corps,' and accompanied the body to the church where the service was to be performed. In the case of Cockburn's drawing the house of the deceased evidently was in Ste. Famille Street and near the Cathedral. The cross at the head of the cortege shows that those who precede the coffin are clergy, wearing the 'camail,' or cape, and the large 'barrette' or headdress of the early days. That they are priests or members of religious orders is also proved by the fact that they wear no crepe as do the bearers. The clergy always walked in front of the coffin. It is probable that owing to lack of space Cockburn shows only a small portion of the procession which followed it . . . It is a most interesting drawing."

Both of these sketches are included by the courtesy of the owner, Sigmund Samuel, Esq., LL.D. 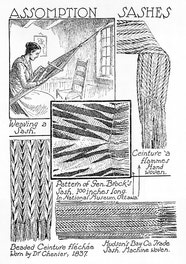 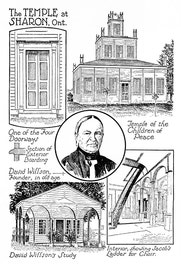 The Temple at Sharon, Ontario