Old Buildings of the Seminary of Saint Sulpice

The Seminary of St. Sulpice, on Notre Dame Street, Montreal, is especially interesting historically since its buildings still appear much as they did two centuries and a half ago. Situated in the midst of the business section of the city, its quiet courtyard, its secluded private garden, its loopholed stone wall and timedarkened masonry belong to an age far removed from the bustling noisy modern world that surrounds it.

The central building dates from about 1683, and was constructed by the Superior, Dallier de Casson, he who thirteen years before had made the exploration of the Great Lakes with deGalinee (See pp.155 and 191). The projecting wings were built a few years later, probably at the end of the seventeenth century or early in the eighteenth. The central doorway, from the stonecarved date above it, 1740, is a later addition. The picturesque belfry and clock face which crowns the facade is said to have been erected early in the eighteenth century, and was the only clock and bell that publicly gave the time for more than a hundred years.

Several of the Sulpicians had a practical knowledge of architecture, and from their plans and under their supervision, these buildings and others, as well as numerous churches, were erected. Besides Dallier de Casson, the Abbe Vachon de Belmont was responsible for the construction of a large portion of the building on Notre Dame Street, while he was at the same time the architect of the Mission and Fort of the Mountain, of which only the towers on Sherbrooke Street remain.

Le Vieux Seminaire, by l'abbe Olivier Maurault, gives an intimate and detailed account of its history and the life within its walls. 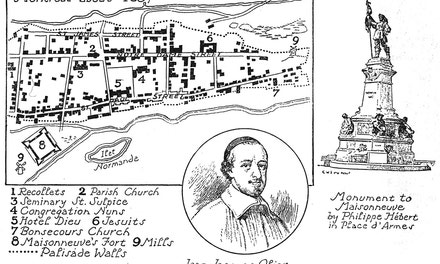 J. J. Olier, 1608-1657, a Paris priest, took a leading part in the Catholic revival of religion in France. With La Dauversiere, he founded the missionary society of Notre Dame de Montreal, which received a grant of the island. 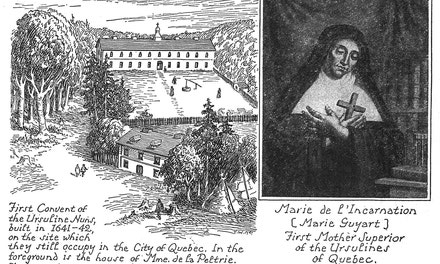