John Poad Drake (1794-1883): born in England; came to Halifax 1819, painted full-length portrait of Chief Justice S. S. Blowers, apparently the only one painted in Halifax. Went to Montreal, where he painted an altar-piece for one of the churches, and later went to New York, where he exhibited a painting of Napoleon on board the Bellerophon, a scene which he had witnessed in Plymouth Sound in 1815. Returned to England, where he died in Cornwall.

Robert Field, born Gloucester, England, about 1770. Came to America about 1792, and worked in New York, Philadelphia, Washington and Boston until 1808, when he settled in Halifax until his death in 1819. In the United States his work was mostly in miniature, though he painted some portraits in oil, and also executed several engravings. In Nova Scotia most of his portraits were oil paintings. Among his sitters were Sir John Wentworth, Sir John Coape Sherbrooke, Sir George Prevost and Bishop Inglis. He is probably the most distinguished of the early portrait painters of the Maritime Provinces.

Albert Gallatin Hoit, or Hoyt (1809-1856), born in New Hampshire, worked for a time in Boston. He visited Saint John, N.B., and later, about 1840, Halifax, N.S., where he painted the full-length portrait of Sir Brenton Halliburton, and possibly some others.

The notes on these artists are from data kindly supplied by Mr. William Colgate. 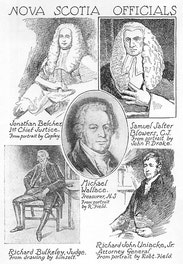 Robert Field, born Gloucester, England, about 1770. Came to America about 1792, and worked in New York, Philadelphia, Washington and Boston until 1808, when he settled in Halifax until his death in 1819. 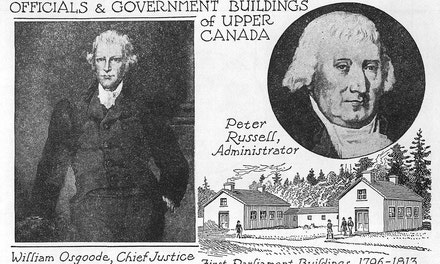 The first Legislative Buildings in York were situated at the lower end of the present Berkeley Street. They were burned by the Americans during the occupancy of York in April, 1813.