J. J. Olier, 1608-1657, a Paris priest, took a leading part in the Catholic revival of religion in France. With La Dauversiere, he founded the missionary society of Notre Dame de Montreal, which received a grant of the island. He sent out four priests of Saint Sulpice in 1657 to establish the Seminary of Montreal.

Paul Chomedy de Maisonneuve, 1612-1676, served in the army. He came to Canada as leader of the missionary settlement of Montreal, which he established in 1642, and of which he was Governor for twenty-two years.

Philippe Hebert, R.C.A., was one of the most distinguished Canadian sculptors. He executed many public statues, of which the Maisonneuve monument was perhaps the most important. The figures at the base represent Lambert Closse, Jeanne Mance, and Charles Le Moine. 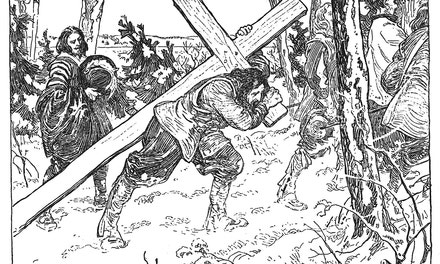 Maisonneuve Carries a Cross to the Summit of Mount Royal

In the picture, Maisonneuve is seen on his way, preceded by the priest and the members of his company. Behind him is his servant, carrying his master's cloak, on which may be seen embroidered a white Maltese Cross... 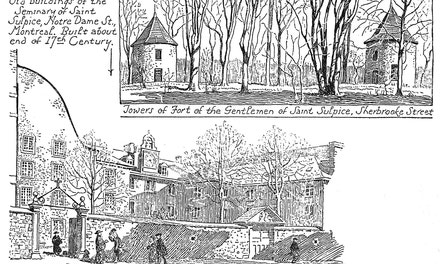 Old Buildings of the Seminary of Saint Sulpice

The Seminary of St. Sulpice, on Notre Dame Street, Montreal, is especially interesting historically since its buildings still appear much as they did two centuries and a half ago.