C.W. Jefferys' notes about this picture in The Picture Gallery of Canadian History Vol. 2

All able-bodied men were enrolled in the Canadian militia.They received occasional training in drill during the year, but the principal muster was on the birthday of King George III, June 4th. Many of them were without fire-arms, and carried sticks, pitchforks, pikes and umbrellas as substitutes. Only a few, veterans of the Revolutionary War or disbanded soldiers, had uniforms. Two of these are shown in the illustration on the left; one of them, a sergeant, is dressing the line with his halbert held horizontally. It is stated that in the battle of Queenston in 1812 none of the militia wore uniforms.

The fourth of June, the birthday of King George III, was the most important holiday of the year in early Upper Canada. On that day, the annual muster of the militia was held. Every able-bodied male between the ages of eighteen and sixty was enrolled, and all were expected to turn out for the occasion. For most of them this annual muster was the only opportunity they had for receiving any instruction in military exercises. It was held in the most central or the most convenient place in each district; in an open field on the outskirts of the principal village, among the stumps of a forest clearing, or at a cross roads, know generally as "The Corners".
Training Day presented a picture of the people of early Upper Canada more complete than any other gathering of the time could give. All grades of society , all occupations, all kinds of political and religious belief except Quakers, Mennonites and such pacifist sects, were represented in the ranks. There was young Abner Bryce, with the first fuzzy down on his chin, wizened Corporal Ezekiel Turney, a veteran of the Revolutionary war, Peter Van Every, the Dutch Loyalist farmer from the Hudson, Humphrey Styles and Patrick O'Donohue and Sandy McGashan from the British Isles, Beniah Parsons who came from Connecticut in Simcoe's time, and took up the water privilege and built the sawmill, Ephraim Terwilleger, who kept the general store, Doctor Sheldon and Lawyer Dunn, Sergeant Hendershott, late of the Northumberland Fusiliers, and Captain Bellairs, half-pay officer of the 141st., Eliphalet Hollinshead, who ran the potashery, Reuben Starkweather, the lanky, buck-skinned trapper from his cabin in the woods north of the back township, and wiry little Louis Renoux from his fur-trading store at the Narrow, where the Mississagas came for their spring fishing.
Early in the morning of the great day the men began to straggle in from the surrounding country. Many came from a distance, and required refreshment at the local Tavern after their long tramp. At the appointed hour, they were drawn up, more or less in line,. Sergeant Hendershott dressed the ranks as well as he could with the help of his halbert and much strong language. The lieutenant-colonel or the major, and perhaps the adjutant rode up on horses generally more accustomed to the plow and the wagon shafts than to the military saddle. The roll was called, and as each man's name was read out, if present, as he should be, he answered; if he was not on hand, a mark was set against his name, and he was later summoned to the Court of Quarter Sessions and fined for non-attendance. Only Quakers, Mennonites and Turkers were exempt from the muster, or the obligation to serve in time of war or rebellion, and sometimes even these were charged a fee for their exemption from Training.
Except some of the officers and a few veterans who still possessed their old red coats, none wore uniforms. Smock-frocks and checked cotton shirts and grey homespun neighbored cut away broadcloth coats and lawn cravats; cow-hide boots, pumps, gaiters, linsey-woolsey stockings, corduroy breeches, beaver hats and coon-skin caps, all were to be seen, each article of clothing indicating something of the social status and occupation of the wearer more noticeably than do the standardized fashions of today.
Their weapons were as varied as their costumes. Some were armed with muskets or blunderbusses, others carried pikes, pitchforks or sticks, occasionally a bulky umbrella appeared.
The drill consisted of a few simple evolutions such as marching in line and in column. Now and then an ambitious commander attempted a wheel of the whole line or a change from line to column of fours, a venture which usually produced complete confusion. The motions of loading, aiming and firing were imitated by this miscellaneous collection of moves with varying degrees of success; but the men at least learned to recognize the words of command. Raw soldiers they were, but perhaps most of them understood the requirements of backwoods warfare better than most of the British army officers trained in the precise parade-ground did of the day. And for musketry practice they had deer hunting in the woods, duck shooting in the marsh and the fall turkey shooting matches at the village.
Around the Training ground gathered the girls, the wives and mothers and children and old men, admiring or critical.
The drill ended with three cheers for His Majesty. The warriors dispersed themselves among the houses of their neighbors. Many sought the tavern, the bar-room did the biggest trade of the year. There was a dinner for the officers and gentry, with a long toast list: toasts to the King, to the Duke of York, Commander-in-Chief, to the Army and Navy, to the Ladies, each accompanied by an appropriate sentiment, expressed in flowery language.
The day was made the occasion of wrestling matches, horse shoe pitching contests, or the settling of old scores by a fight, which frequently ended in a general melee with plenty of black eyes, bloody noses and sore heads, but with general satisfaction to all concerned.
The June night darkened over the settlers and their families trudging homeward, tired but happy, along the rough concession roads. Training Day was over and tomorrow the routine of pioneer life would be taken up once more. 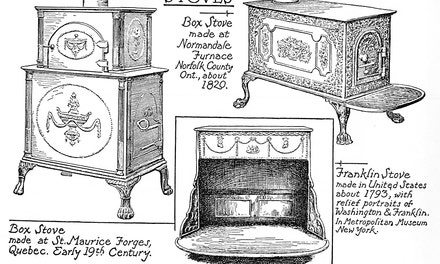