William Black, 1760-1834, "the father of Methodism in Nova Scotia," was born in Yorkshire, and came to Nova Scotia with his parents in 1775. He became a preacher in 1780 and eventually was appointed General Superintendent of Wesleyan Missions in British America.

William Case, 1780-1855, was born in Massachusetts. He was first stationed on the Bay of Quinte. Later he became Presiding Elder of the Methodist Church in Canada and the United States, and Superintendent of the Wesleyan Methodist Church in Canada. In 1828 he was Superintendent of Indian Missions in Upper Canada, and from 1837 to 1851 in charge of the Wesleyan Indian School at Alnwick, Ontario, where he died.

Nathan Bangs came to Canada as a teacher and surveyor. Converted to Methodism, he was sent to organize a circuit in the Long Point settlement on Lake Erie. Here and in the Niagara district. on Yonge Street, on the Bay of Quinte, on the Thames, at Detroit and Quebec, he laboured until 1807, when he was transferred to the United States. He visited Canada frequently thereafter. 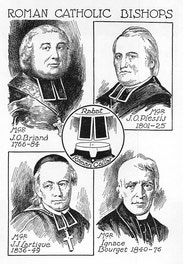 The Catholic clergy in Canada, during the French regime and until about 1860-1875, wore a sort of tab beneath the chin, called a Rabat. This was a piece of black cloth or silk, divided into two oblong parts, edged with white. 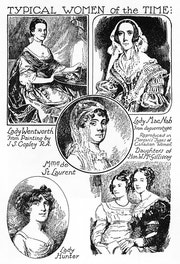