Acadia was a territory of uncertain extent and vague boundaries. Its geography was little known, and its undefined frontier was the cause of continual dispute. Not only did nations quarrel over its possession, but feudal lords, rival noblemen and competing traders fought with each other for the right to the fisheries of the coast, to trade with the Indians for furs, and to the settlement and government of the country.

LaTour had secured a grant from the French king, and claimed a large part of the territory. But a nobleman, Charnisay, a friend and relative of the great minister, Cardinal Richelieu, had influence at the court of France, and he, too, received a grant of land. This included much of the country claimed by La Tour, with the right to trade and fish there. A long and bitter feud arose between the two, and the coasts of Acadia became the fighting ground of the rival claimants and their followers. For years the conflict went on, with alternate success and defeat for each party. In all these vicissitudes, Madame La Tour shared as a worthy helpmeet to her adventurous husband, taking her part both in the business and the fighting.

In the spring of 1645 La Tour went to Boston to beg aid from Massachusetts, in exchange for a share in his trade and territory. He left his fort at St. John in charge of his wife, with a garrison of fifty men. Charnisay heard of this and attacked the post. Inspired by their heroic mistress, the defenders held out against assaults continued day and night until toward the evening of the fourth day, Easter Sunday, Charnisay's men succeeded in making a breach in the palisades and entered the fort. After further desperate resistance, Madame La Tour finally surrendered, on promise that the lives of her men should be spared. Charnisay broke his promise, and hanged all the defenders except one man, whom he allowed to live on condition that he acted as hangman to his companions, and Madame La Tour, who was compelled to witness their execution, with a rope around her own neck. Broken-hearted, she fell ill, and, within three weeks of the surrender, she died. Somewhere within the limits of the present city of St. John, New Brunswick, rests the body of the barber's daughter of Mons, the heroine of Fort La Tour.

The picture gives an idea of the arms and costumes of the time. At close quarters, the fight was probably carried on with pistols, swords and pikes sixteen feet long. Some of the combatants probably wore steel helmets and breastplates, while others would be clad in wide-skirted coats of thick buff leather.

The picture gives an idea of the arms and costumes of the time. At close quarters the fight was carried on with pistols, swords, and pikes sixteen feet long. Some of the combatants probably wore steel helmets and breastplates, while others would be clad in wide-skirted coats of thick buff leather. The cannon were of small calibre, three or four inches, in comparison with their heavy construction, with very thick barrels of cast iron or brass, and wheels bound with iron bands. 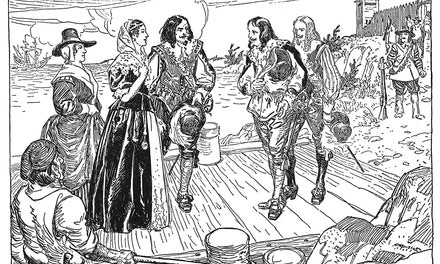 The story of La Tour and his bride sounds more like romantic fiction than sober historic fact, and indeed, much of it seems to be only vague legend, set going by the tales told by La Tour's rival, De Charnisay... 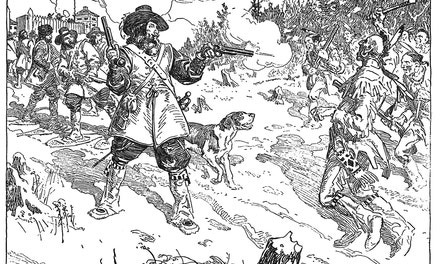