In 1779, a boy of fifteen years of age began work as a clerk in the counting-house of Gregory, McLeod and Co., merchants, of Montreal. He was named Alexander Mackenzie and was born in Stornoway, in the Island of Lewis, in Scotland. His mother died when he was a child, and his father, Kenneth, went with his son to New York in 1774. Young Alexander was sent to Montreal, where he attended school. In the year after he began to work his father died and the boy was left alone to make his way in the world.

He was a hard-working, reliable and persevering youth. During the five years that he worked for his employers he won their confidence in his ability, judgment and honesty, and when only twenty years of age they took him into partnership.

The fur trade was the backbone of Canadian business at this period. Montreal merchants sent their employees with canoe-loads of goods far into the north and west, which were exchanged for the skins of beaver and other wild animals, which swarmed in the northern wilderness.

Mackenzie's company pushed their trade into this vast territory, and the young partner was sent to the Churchill River. In 1787, his firm united with their powerful rivals, the North-West Company. Mackenzie was given charge of the far north-western district of Athabasca. Fights between the competing traders had demoralized the Indians and almost ruined the trade; but Mackenzie proved capable and enterprising, and soon put the business on a sound footing. He built a new post, which he named Fort Chipewyan, on the Lake of the Hills, to-day called Lake Athabasca.

Successful trader and business man though he was, Mackenzie had the spirit of adventure, and was not content with the routine of Indian traffic. He felt a keen desire to explore the unknown country, which lay all around him. In the preface to the account of his voyages, which he afterwards wrote, he gives a good description of himself. "Being endowed by nature with an inquisitive mind and an enterprising spirit; possessing also a constitution and frame of body equal to the most arduous undertakings, and being familiar with toilsome exertion, I not only contemplated the practicability of penetrating across the continent, but was confident in the qualifications to undertake the perilous enterprise."

Traders and Indians told him stories of a great river that would lead to that Western Sea, which so many explorers had sought. Out of the western corner of Lake Athabasca ran the Slave River to the Great Slave Lake, from which flowed another and a greater river. This much was known; but whither did it flow? Might it not empty into the Pacific and prove to be the long-sought route to the Western Coast? Mackenzie determined to find out for himself.

On the third of June, 1789, he started from Fort Chipewyan on his voyage of discovery. He took with him five French-Canadians, two of them accompanied by their wives, a German and several Indians. They travelled in three birch-bark canoes, laden with a small store of provisions, goods for presents to the Indians, blankets, nets for fishing, and an ample supply of ammunition, since they relied principally upon the game of the country for their subsistence. With this meagre equipment, and a stout heart and a clear head, Mackenzie embarked upon his great adventure.

On Great Slave Lake they were delayed several days by ice. They spent their time hunting and fishing: wild ducks, geese and swans were flying north, beaver, deer and caribou were plentiful, and the lakes and rivers were full of fish. On the 21st, the ice was melted sufficiently to allow them to make some progress. With the thaw came swarms of mosquitoes, and thereafter they were tormented continually by these pests. Some days were spent in searching for the outlet to the unknown river. At last, on the 29th, they found the westward flowing stream, known to-day as the Mackenzie River. At that season in those northern latitudes, there was almost continuous daylight: they started early and camped late, and Mackenzie urged on his men to their utmost speed. To the westward, after some days, they saw the distant Rocky Mountains, and before long the river began to trend northward.

At several places they saw Indians. Mackenzie went ashore and made friends with them, giving them presents of knives, beads, and hatchets. They told him fearful tales of the dangers ahead of him, of stupendous waterfalls, fierce and bloodthirsty natives, huge and horrible monsters. Mackenzie was not influenced by these stories, but his own Indians were alarmed, and wished to turn back, and it required all his· tact and firmness to keep them to their work, and to induce some of the natives to act as guides.

On the 10th, he took an observation, and found that he was farther north and east than he had expected, and concluded that the waters, instead of flowing into the Western Sea, led to the Arctic Ocean. On the 11th, Mackenzie sat up all night and saw the midnight sun. Next day the banks became lower, and the river divided into several channels. He had reached the Delta, and was near the end of the voyage.

As they proceeded, the water grew shallower: ice and snow were seen in the valleys. There were no trees except a few stunted willows, but short grass and wild flowers were growing in profusion. On the 12th, they reached a high island, to the west of which lay a large expanse of water, bounded by solid ice. Mackenzie landed, and climbed to the highest point of the island. The ice-barrier extended from the southwest far to the eastward, and further progress was impossible. They camped on the island, and that night the tide rose and they had to remove their baggage beyond its reach. They were on the sea-shore; but it was the Arctic Ocean and not the Pacific which they had reached.

For three days they remained, seeking for an outlet through the ice, fishing to help out their provisions, which were running low, and hoping to meet some Eskimos, from whom they might learn something about the country. On the 14th of July, Mackenzie erected a post on the island, and engraved on it a record of his visit. The island he named Whale Island from the white whales which he saw off the shore.

Speedy return was necessary, and Mackenzie two days later, made for the river and began his homeward journey. It was harder work against the strong current: in many places the canoes had to be hauled by the men walking in the water up to their waists, or scrambling along the focky banks which tore their moccasins to pieces. The Indians gave them some trouble, game was scarce, their canoes required frequent repairs; but on the 12th of September all arrived safely at Fort Chipewyan. The journey had covered 2,990 miles and had occupied 102 days. It was a wonderful exploit: but it was plain that the way to the Western Sea must be sought elsewhere than by the great river.

The picture shows Mackenzie looking at the Arctic Ocean from the summit of Whale Island. The long shadows on the ground indicate the low unsetting sun, and the fluttering garments of the men suggest the strong northwest gale which Mackenzie says blew during their stay. 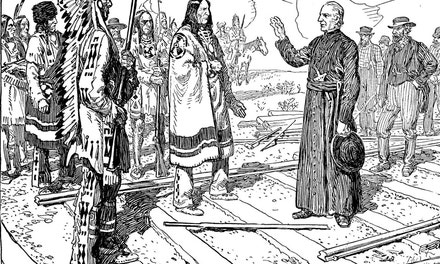 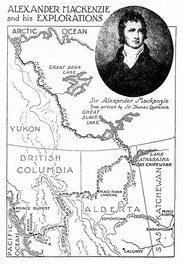 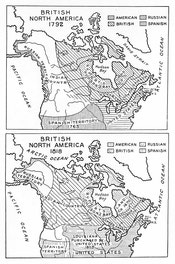