The acknowledgment of the independence of the United States by Great Britain was the final crushing blow to the Loyalists. Peace offered them no security. By the treaty of 1783, the representatives of the new republic promised only to recommend the Loyalists to the merciful consideration of the various states. The mercies of the victorious rebels were not likely to be very tender. Branded as traitors, driven from their homes, and in peril of their lives, they were thrown upon the care of the British government.

At the close of the war, some of the Loyalists went to England, a few to the West Indies; but for most of them new homes had to be found in the remaining British colonies in North America. The government transported a large number to the Bay of Fundy and the neighbourhood of the River St. John to form the beginning of the Province of New Brunswick. Others were sent to Nova Scotia. Many settled in the Niagara district.

The greatest migration to Upper Canada took place along the shores of the St. Lawrence and the Bay of Quinte. In the early summer of 1784 the refugees started on the long journey to their new homes. They numbered about four thousand persons, and it touches our sympathies to know that almost a third of them were children. There were no roads; some Indian trails led through the dense woods, but the only highways were the lakes and rivers, and water-craft the only means of transportation.

Hundreds of bateaux, long, open, shallow boats, with pointed ends, carried the settlers and their baggage, their provisions, and some tents for shelter against stormy weather. Day after day they pulled at the oar, or pushed the boats with long, iron-shod poles against the swift current of the St. Lawrence. Rapids broke the river into a smother of foam and tumbling waters, where the boats had to creep close to shore, or be carried overland, while the voyagers, laden with their goods, tramped across the portages. Mosquito-bitten, burned with the sun, drenched with rain, and damp with the river mists, cooped for hours in the crowded boats one can imagine something of their discomforts. But doubtless, too, there was much that was enjoyable on the journey. Days of clear sky, bright sunshine, and cool breezes, the colour of the forest-clothed banks, the exhilaration of the rushing river, the trout and maskinonge caught, the ducks, or an occasional deer shot to vary their rations of salt pork and biscuit-these were things they would remember with pleasure. Probably, too, they lightened the journey with Gaelic songs and the skirl of the pipes from the Highlanders on their way to the future settlements of Stormont and Glengarry.

At nightfall they drew in to the shore and family groups gathered around the camp-fire. The older folk warmed their cramped and chilled limbs at the blaze, the children drowsed, mothers soothed their fretful infants. Above and around them stretched the endless trees, the great river rushed ceaselessly past them: at such times, in the vast solitude, memories must have come to them of the familiar homes they had left, of scenes and faces never to be looked upon again; and fears and anxieties for the unknown future that lay before them and their children must have burdened their hearts.

They have left scanty records of their feelings and experiences but from a few old letters and diaries we can see that for the most part they faced their difficulties with cheerful courage. Rarely do we catch a word that gives us a realization of the first heart-breaking years of their exile, such, for instance, as fell from the lips of the grandmother of Sir Leonard Tilley - "Such a feeling of loneliness came over me that, though I had not shed a tear through all the war, I sat down on the damp moss with my baby in my lap and cried." 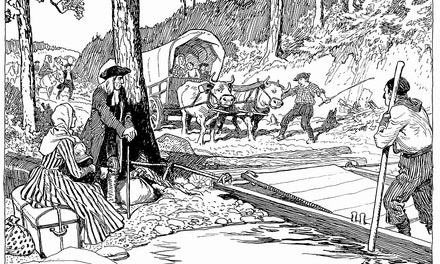 Loyalists on the Way to Canada

The picture shows a party of these early Loyalist refugees arriving at the bank of a river on their way to Canada. A rough road has been cut through the woods to the crossing place.

The picture shows the drawing of the lots. One of the leaders of the party holds the hat: beside him is seated the assistant surveyor, who acted as the land agent and registrar...