In order to understand French Canada, something of the history of France must be known. Old France was the social, political and religious background of New France. Canadians of British birth or ancestry from their childhood imbibe some knowledge of the history, the institutions and manner of life of their forefathers in their homelands; but in general they know little of the type of civilization which formed their French fellow Canadians. Both people were modified in character by their new world surroundings, but each retained and is still influenced by its ancestry.

The reigns of the French kings whose portraits are here included, cover most of the period of French rule. Since the French monarchy was largely personal, the character of the king influenced the colonial policy very strongly, even when exercised through a powerful minister like Richelieu or Colbert.

Observe that Henri IV and Louis XIII are depicted as wearing their own hair, while Louis XIV and XV are shown in wigs. It was in the reign of Louis XIV that the wig came into general use by men throughout Europe, and continued to be worn in various forms in France until the Revolution, and elsewhere until the beginning of the nineteenth century. Portraits of Louis XIV as a young man show him with his own hair worn in long curls. The wig he is shown as wearing in the portrait here reproduced imitated this long-haired Cavalier style of hairdressing and was known as a "full-bottomed wig." 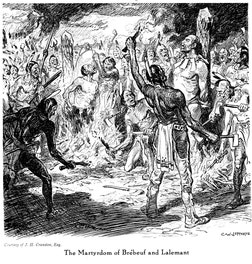 They were led back to St. Ignace and put to the dreadful tortures which the Iroquois inflicted upon their prisoners. Brebeuf suffered for four hours, when a chief cut out his heart and ended his agony. Lalemant, in spite of his frail physique... 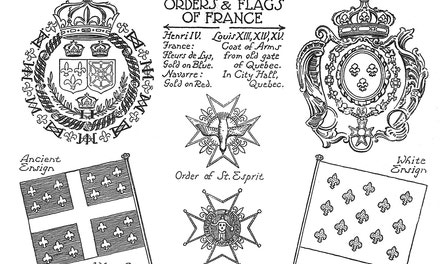 Coats of Arms, Orders and Flags of France