The earliest settlers buried their dead in small plots on their farms. The graves were marked by wooden slabs or roughly shaped stones on which brief inscriptions, often only initials and dates, were crudely scratched. In course of time the wooden markers decayed, the stones were broken, and today few of these first memorials remain, and many of these early burial plots are indicated only by the low grave mounds.

During the period from about 1770 to the eighteen-thirties the inscriptions were incised with Roman lettering, and an occasional line of slanting Italic, the letters generally well shaped and harmoniously spaced. Sometimes, however, the carver's miscalculation made it necessary for him to diminish the size of the last few letters and crowd them together to finish the line. This feature occurs frequently in the stones of this period. A simple carving in low relief often ornamented the head of the stone; an urn, a weeping willow, a hand with heaven-pointing finger were favourite emblems.

About 1830-1840 rather clumsy raised block lettering came into fashion. Decoration became more elaborate and the tombstones lost the simplicity, harmonious proportions and graceful delicacy that marked the earlier incised stones. From then until well into the eighteen-eighties tombstone fashions became progressively pretentious, and echo the bad taste that characterized the house decoration and furniture of the period. 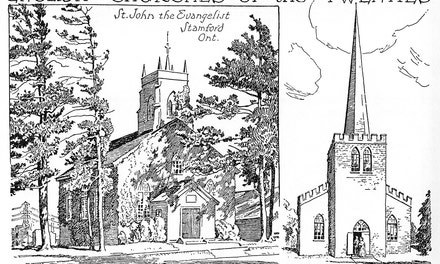 English Churches of the Twenties 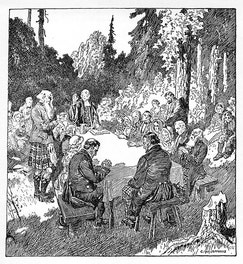 In pioneer days, especially in Nova Scotia, before churches were built, the Presbyterians of a neighbourhood gathered to partake of the Communion in some convenient place in the open air, often in a clearing in the woods.