This house, on Lot 5, Malden Township, on the Detroit River, is one of the few surviving buildings of the earliest period of Upper Canada settlement. The house is marked on a map of 1796 as one of six on the river front below Amherstburg. The United States Commissioners to the Western Indians were the guests of Captain Elliott, and the Journal of General Benjamin Lincoln, one of the Commissioners, has this reference, under date of July 21, 1793: "Captain Elliott received us with hospitality, and gave us the use of his house, garden, etc .... We had a full supply of boiled green corn, which was well grown .... Elliott has the best farm in the country I have seen, by far." In October of the next year Lieutenant-Governor Simcoe spent some days at Elliott's, on his expedition to the Miami. It is probable also that here took place the famous meeting between Brock and Tecumseh in 1812.

Matthew Elliott (1739-1814) was a trader with the Indians, who later became Deputy Superintendent in the Indian Department. He settled on the Detroit River after the American Revolution. He was Colonel of the 1st Essex Militia (1798-1814) and member of the House of Assembly for that county, 1800-1812. He served at the capture of Detroit, at Fort Meigs, Moravian Town, and Black Rock.

The present half-ruinous condition of the house enables us to see the method of its construction, which probably was that of many of the better houses of the time. It is a frame of hewn beams resting on a double wooden sill. It was sheathed and plastered inside, and covered by clapboards outside, with the exception of the south side of the lower storey, which is built of squared logs butting on the uprights of the frame. Between the upper and lower storeys are placed two sets of joists, the lower ones running lengthwise of the house, the upper ones resting on them crosswise and parallel with the gables, with their ends protruding outside under the eaves. The chimneys extend beyond the frame, that on the north being entirely outside the wall and placed nearer the western front, the other is centred on the southern gable and extends only half its depth beyond the building. They are built of dressed stone, the fireplaces lined with red brick, some courses of which are carried across the faces of the walls on the sides of the fireplaces. Some of the beams are pitted with small triangular indentations, evidently to key the plaster. 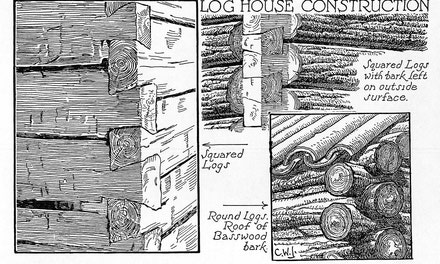 Squared logs, Squared logs with bark left on outside surface. Round logs. Roof of Basswolrd bark. 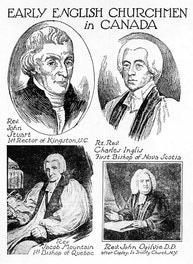