David W. Smith (1764-1837), son of Lieutenant-Colonel John Smith, of the 5th Regiment, Northumberland Fusiliers, who was commandant of Fort Niagara. Son was officer in the same regiment. Member and Speaker of House of assembly. Appointed Surveyor-General, Upper Canada, 1792. Returned to England, 1802. Became manager of Duke of Northumberland's estates. Created Baronet, 1821. His house at Newark, built about 1793, was one of the finest in the province at that period. The Toronto Public Library acquired in England a large collection of his papers, which contain much valuable material on early Upper Canada.

William Dummer Powell, born in Massachusetts, educated in England and Holland. Returning to Boston, 1772, he came thence to Canada, where he was admitted to practise law. Later became judge and was Chief-Justice, 1816-1825. Prominent in the province during its early years. See monograph on him by His Honour Judge W. R. Riddell, the authority on the legal history of Upper Canada. William Jarvis (1756-1817), born in Connecticut. Cornet in Queen's Rangers, and served in Revolutionary War. Came to Upper Canada as Secretary and Registrar of the province. His family, descendants and connections were prominent in public affairs for many years.

Hon. Robert Hamilton (1750-1809), born in Scotland, established himself at Queenston soon after the Revolutionary War. He and Hon. Richard Cartwright at Kingston were the principal merchants in early Upper Canada. Member of the Land Board and of the Executive Council. Much correspondence relating to business is contained in the Cartwright Papers in the Douglas Library, Queen's University, Kingston. See also paper on the Hamilton family, by H. F. Gardiner, in Vol. VIII, Ontario Historical Society, Papers and Records.

Note that the costumes and hair-dressing of Smith and Jarvis are of an earlier date than those of Powell and Hamilton: the former wear wigs, the latter their own hair. The wig began to go out of fashion about the time of the French Revolution, though it was retained by many elderly men until the early years of the nineteenth century. 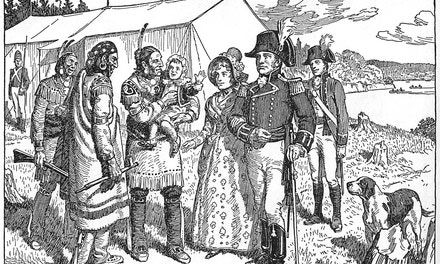 Mrs. Simcoe's Diary says, There was a party of Ojibway Indians here, who appeared much pleased with the firing. —a salute of 21 guns to celebrate the occasion. One of them took Francis in his arms... 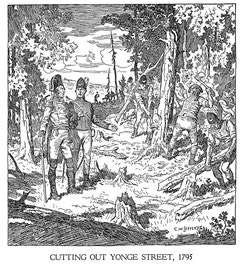