During the early part of this period women's smart dresses were fashioned with paniers, worn over the sides of the skirt, which was supported by a hoop. These both disappeared by about 1790 when fashion changed to a high-waisted, loose, onepiece garment, which was supposed to imitate classical drapery. Every woman tried to look like a Greek or Roman statue. About this time, too, came in the use of shawls woven with Oriental designs, known later as Paisley shawls. In harmony with these dresses were the furniture and room decoration of the time, the Empire style. The illustrations show the dress of fashionable society; but it must be remembered that among the pioneers clothing was of heavier and stouter materials, suited to their occupations and surroundings, and that the few fine dresses which they possessed were of an older fashion.

Three of the numerous styles of men's wigs are shown. By the end of the century they were rapidly disappearing, and men were wearing their own hair, though generally dressed in much the same way as the wigs. With the coming of the classical style they began to cut it shorter at the back and dress it higher on the head.

The evolution of men's hats is seen in the gradual change from the three-cornered eighteenth century hat to the riding hat, the forerunner of the stiff, high, "top" hat of the next century 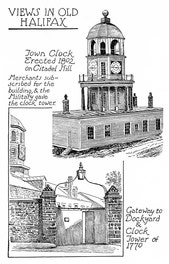 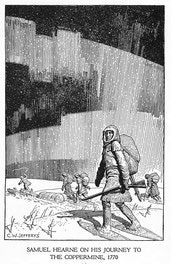 Samuel Hearne on His Journey to the Coppermine, 1770