Champlain Trading with the Indians

Oil on commercial canvas board

All along the shores of the Gulf and the River St. Lawrence, during the later years of the 16th century and the first half of the 17th century, a brisk trade was carried on with the Indians for furs. Various companies from time to time secured monopolies of the trade from the king; but independent traders often encroached on their privileges, and bartered with the Indians. Vessels from France made their way up the river, and the traders came ashore and displayed their wares. Glass and porcelain beads, looking-glasses, blankets and bright coloured cloths, hatchets, knives, needles and kettles were especially tempting to the Indians, who exchanged for these articles the skins of moose, bear, wolf, fox, marten, and especially beaver, the fur of which animal was used in Europe in the making of fine hats.

Gold was the treasure which explorers first sought, as the Spaniards had done in Mexico and Peru. Disappointed in this, they found profit in the abundant fisheries, and in trading with the Indians for furs. Beaver was the most valuable, and for over two hundred years was in great demand in Europe for the making of fine hats. The Indians in return were eager to acquire blankets and cloth and trinkets for personal decoration; but especially articles of steel and iron, such as hatchets, knives, needles and kettles. They had not learned to smelt metals, of which they used only native copper, which was too soft for heavy work.

One of the first times that this image was published was in this 24 page booklet.

In presenting this little book to the people of Canada as a Souvenir of its New Building, now practically complete, the Robert Simpson Company Limited, feels that no Canadian illustration of progress can be more graphic than its own - that of the Retail Store.

While the motives for publishing the booklet may at the time have been well intended and  honorable, there is a matter of historical accuracy that needs to be addressed. The author, S.H. Howard ascribed the caption, "The First Exchange of European and Canadian Commodities -- Jacques Cartier in the St. Lawrence River, 1535" to the picture and in the associated text, he refers to Jacques Cartier...

The commercial history of Canada must in the same way date from the landing of the French in that noblest of mighty rivers, the St. Lawrence. Here in 1535 Jacques Cartier came sailing in from the open sea, having found his way into the gulf across that vast Atlantic Ocean which people yet even in his day believed illimitable. He landed near Cape Diamond, and there he performed what was probably the very first business transaction to take place in Canada. He traded beads and gewgaws for furs with the strange red-faced people whose village he found there in the valley of the St. Charles, behind the great rock where to-day stands Upper Town and the Old Citadel of Quebec.

Based upon other illustrations and paintings of both Jacques Cartier and Samuel de Champlain by C. W. Jefferys, it is clear that this picture is in fact, a depiction of Champlain, not Cartier. So what are we to believe? Did the author knowingly take a gross leap of artistic license in order to illustrate his text or was it simply an innocent mistake?

No doubt Jefferys himself must have noticed the error and may have even made some sort of note about it somewhere possibly even in other published works such as the Toronto Star or the Globe and Mail...or maybe it was just never mentioned. Now -- 105 years later -- the oversight has been duly noted.

I have come across several instances on the web where the image "Champlain Trading with the Indians" is actually the mirror image of the original painting in the collection of Archives Canada.

Perhaps the designer who implemented the page worked from a transparency which was scanned upside down resulting in the reversal and simply didn’t notice the difference. Unfortunately, the ease with which one can copy images from the web has helped to perpetuate this error.

Not only does this interpretation of the image do a disservice to the artist’s original intent, but displaying the image in reverse invites some subtle but important historical inaccuracies and nuances as to how the subject matter could be interpreted. In this view, Champlain is shown to be wearing his sword on his right side contrary to other images showing it on his left side. We don’t know if he was right or left handed but knowing what a stickler C.W. Jefferys was for accuracy, it is doubtful that he would have been mistaken in this regard. The image also presents the Indian holding onto his garment with his right hand leaving his left hand free to gesture and/or otherwise greet Champlain. In all likelihood, it would be his right hand that would be free for both defense and gesticulation. 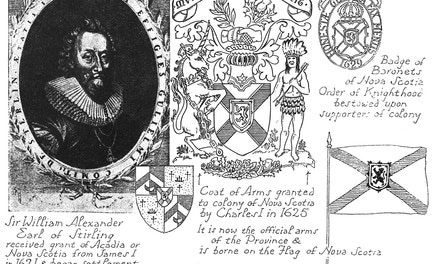 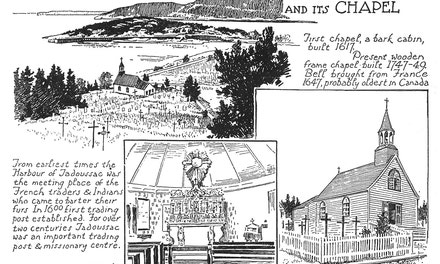 Tadoussac and it's Chapel

From earliest times the harbour of Tadoussac was the meeting place of the French traders and Indians who came to barter their furs. In 1600 first trading post established. For over two centuries, Tadoussac was an important trading post and missionary...