Arrival of the Brides at Quebec

Settlers who would make permanent homes and till the soil were needed, if New France was to become a prosperous and populous colony. Agriculture was a firmer foundation for a country than fur trading. But, during the earlier years, while Canada was monopolized by trading companies whose main interest was immediate profits, there was no real colonization.

In 1665, Louis XIV abolished the charter of the Company of One Hundred Associates, to which the country had been granted, and made Canada a royal province, ruled directly by himself. He appointed an Intendant, as a sort of general manager, in addition to the Governor, who represented his own royal person. The veteran regiment of Carignan was dispatched to defend the colony, and real settlers were sent out in considerable numbers.

But there could be no permanent homes without wives, and unmarried women were scarce in Canada. So, in the next few years, several companies of marriageable young women were shipped by the king to find husbands in the colony. The young men flocked to the marriage market, and selected their wives, and soon most of the girls were married. Matrimony was encouraged by a tax upon bachelors, spinsters and the parents of marriageable children, and every newly-wedded couple was rewarded by gifts of money and goods to aid them in starting housekeeping. Most of the marriages, we are told, turned out happily. In a few years, the number of habitant farms had increased greatly, and French Canada became a land of homes, of husbands, wives and children, with a love of the native soil and a vital interest in the future.

The picture shows the arrival of a shipload of the prospective brides. The young women, dressed in their best, and looking their prettiest, have landed on the wharf, and are walking past the assembled male population, on their way to their lodgings, where, under the supervision of religious women, the mutual choice will be made. Both bachelors and brides came from various grades of society; well-educated girls, suitable to become the wives of officers, peasant women, girls from orphanages, merchants, soldiers and habitant farmers; but all alike, under the circumstances, would put on their best clothes. It was an age of ribbons and laces, frills and feathers, and long hair, or fullbottomed wigs, when colours were gay, and fabrics ranged from leather and buckskin to silk, satin and velvet.

By the middle of the seventeenth century marked changes in costume had occurred. The sleeveless short outer jerkin gave place to a coat with sleeves and long skirts extending to the knees. It was an age of ribbons and laces, frills, feathers, buttons and braid. 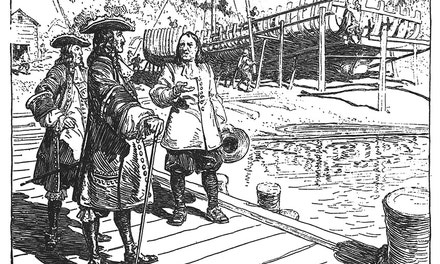 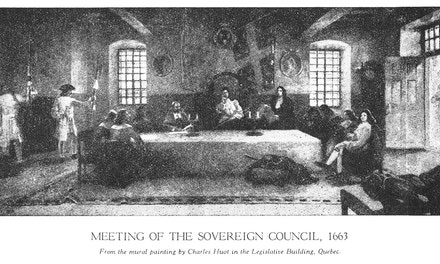 Meeting of the Sovereign Council